Here in the Weasel household, we get through a hell of a lot of garlic. Especially during the very short period in the year (around July) when you can buy green garlic (this is garlic which is fresh from the ground and has not been dried; green garlic has a very sweet, delicate taste and roasts magnificently), we spend a fortune; the supermarkets ask a premium for it. Rather than paying my entire salary to European garlic magnates, I decided that this year I’d plant some. 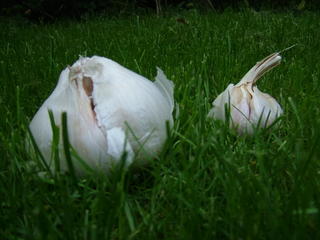 You don’t have to buy any special kind of garlic for growing; the stuff you buy in the supermarket is fine. I bought a bulb of elephant garlic (a giant variety – it’s quite unusual to find it in the shops in the UK, and I ended up paying £4 for my precious, half-pound bulb at the Burwash Manor Larder, a delicatessen near Cambridge), and a net of regular garlic bulbs. You can see the difference in size here; the bulb on the right is normal garlic (and the same size as the garlic you probably have in the kitchen now). The elephant garlic is . . . elephantine. It doesn’t taste as strong as smaller varieties, but it’s a good roaster, and the individual cloves are huge and beautiful; this bulb (bigger than my fist) only produced four cloves, each of them enormous and juicy-looking.

In the UK, it’s best to plant garlic in October, although some garden centres carry a specialist garlic you can plant in the spring. October-planted garlic will be bigger and taste better. It’ll be ripe in the summer. It’s an unattractive plant (which is why I have decided to only give one bed in my rather small garden up for it, along with a container – I want to see whether it performs best in the container or in the ground), but much more of it is edible than the parts you can buy in the supermarket; the shoots which are produced in the spring can be eaten like a gorgeously garlicky spring onion, and the scapes (the flowering heads), which have to be removed to increase the size of the bulbs, can be cooked as a vegetable; they make a magnificent stir-fry. It’s worth making a bit of the garden look mildly hideous until next July. 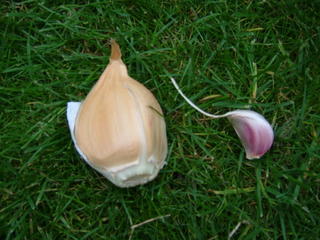 The larger the individual clove you plant, the larger the bulb of garlic it will produce next year. This is one of the four cloves of elephant garlic with one from the supermarket. I was lucky; both bulbs of supermarket garlic had large, evenly-sized cloves. I haul the remains of this summer’s sweet peas out, dig in some compost and plant the garlic – the elephant cloves go in 15cm deep, the others 10cm deep. I leave enough space to make sure there’s enough room for the bulbs to grow nice and big.

I wish Waitrose were still selling solo garlic, a Chinese variety which is much more mellow and creamy than regular garlic, and which grows as a single, spherical clove. My Dad’s Chinese, and he remembers eating it as he was growing up. Garlic is immensely important in Chinese cooking. There are references to the bulb in Chinese literature from four thousand years ago, where lambs prepared for sacrifice were sprinkled with garlic to make them more appealing to the gods. I think I’ll sacrifice a chunk of lamb larded with garlic to . . . myself some time next week. 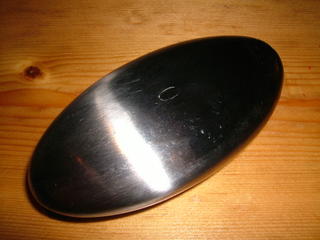 I had a boyfriend whose mother, a teacher, refused to eat garlic in any form, in case her students smelled it on her breath. What a waste of eating opportunities. Parsley is meant to help deodorise the breath, and red wine is supposed to help too, if you’re the sort to worry about that kind of thing. If you worry about the smell on your hands after you’ve been cooking with it, you can get rid of it completely by rubbing your hands with a piece of stainless steel (a teaspoon will do) under a running tap. I have no idea how this works, but it does; try it. (It also works on unpleasant perfumes which have been sprayed on you as you pass a keen shop assistant.) I use this rather natty, hollow, stainless-steel pebble, which I got from John Lewis; you can also buy them online at Royal Doulton.