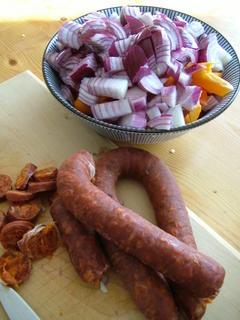 We had two sets of friends round for lunch today. This presented a bit of a problem; first off, they’ve both got very small children I like spending time with, and the children create problems with punctuality. It is remarkable, according to parents I know, how nappies are filled, vomit is produced and knees grazed the very minute you want to leave the house. I needed to cook something I could leave on the stove for an hour or so, in case of lateness, and which would also need little attention if I wanted to play with the kids.

I ended up with a weasely interpretation of a Gordon Ramsay chorizo casserole, first introduced to me by my teetotal mother-in-law. I am not, of course, worthy to make changes to recipes by the divine Gordon, but I am also considerably too big for my boots, so I have made changes with gay abandon.

Split red lentils are a real store-cupboard essential, ready to be thrown into a winter soup or stew as a natural thickener. Chorizo is another useful winter standby – it keeps in the fridge indefinitely and will jazz up all manner of dishes.

1 Cut the chorizo sausage into fairly thick chunks, about 2.5cm long. Heat the oil in a large sauté pan or casserole, add the paprika and garlic, and cook for 30 seconds. Add the sausage, onion, celery and peppers. Cook for 2-3 minutes or until the sausage begins to sizzle. 2 Add chicken stock, tomatoes and lentils, reduce the heat and simmer for 1-2 hours. 3 Sprinkle with the fresh herbs and serve immediately.

I mess with this recipe in a thoroughly disrespectful manner, especially considering that it’s
from the pen of Gordon, Canon of the Casserole; for six people I use two chorizo, a couple of tablespoons of paprika, a teaspoon each of fennel and cumin seeds with the paprika, and four peppers, leaving the amounts of onion, celery, stock and tomato the same. (I cheat and use two tins of plum tomatoes.) Towards the end I add a wine glass of marsala (anathema to my poor mother-in-law, who doesn’t know what she’s missing) and about half a lemon’s worth of juice.

What is it with the British and paprika? Here, it’s sold in pathetic quantities; you buy it in spice jars of the same volume as those they sell star anise, coriander seed and . . . everything else in. For a while now I’ve been buying spices and herbs at Daily Bread, a wholefood warehouse in Cambridge where they sell them by the jam jar or by the enormous plastic bag. They’re mildly barking wholefood Christians, but the spices are great, so I ignore the God stuff and just pillage their shelves, thinking wicked, gluttonous thoughts. 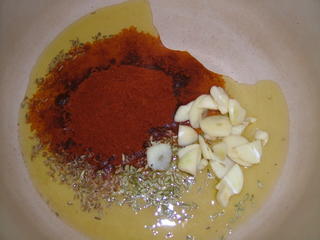 There is no point in buying a pathetic pot of paprika from the supermarket; this recipe (like many Spanish and Hungarian recipes) requires two tablespoons of the stuff, which means a good half-pot in supermarket terms. Paprika is powdered, dried capsicum or red pepper; it isn’t chile-hot like cayenne pepper, but has an almost smoky, deep sweetness. Here is a phenomonal amount of powdery redness with the fennel, cumin and garlic.

I fry all the spices together in olive oil, then add the chopped vegetables, and stir-fry with vigour, dancing all the while in an inappropriate manner to a kid’s album by They Might Be Giants, in an attempt to get in the mood for the four small visitors who are arriving soon. The chorizo rings do contain some chili, but not enough to hurt little mouths. 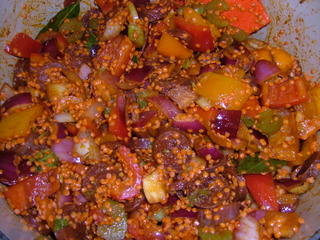 Once the vegetables are blanched, I add the lentils, stir fry a little longer, and then add the tomatoes and liquids. This will now be perfectly happy sitting on the stove for a few hours, which gives me ample opportunity to do my dinosaur impressions in the living room once my guests arrive.

A word of caution; I am not a parent, and so I’m very prone to over-simplify around child-feeding-philosophy. I do believe that bright colours go down well, though, and that bite-sized bits work well too. The neophobe toddlers I’ve been playing dinosaurs with (I feel that I have done my work for the day in inculcating feelings of omnivorous superiority to the herbivore Brontosaurus. The kids and I have decided that he is beneath contempt, lacking any normal, healthy interest in sausage) are especially interested in eating this once they’ve had a stir and dropped some extra sausage in. (Later, we go into the garden and pick our own apples and pears. A miracle occurs – suddenly the children are interested in eating fruit.) 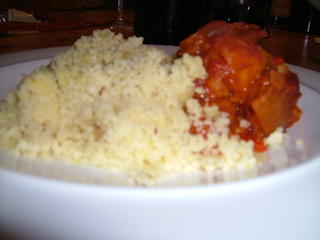 We serve up lunch with a good splodge of cous-cous, flavoured with shallots, fennel, cumin and coriander. The kids throw a lot of it around, but also ingest a surprising amount. My work here is done.

The children later gravitate to the television, which we have pre-prepared with lots of DVDs of cartoons by Hayao Miyazaki. We grown-ups sit around the kitchen table, drinking a ridiculously potent chestnut liqueur which I bought in France on holiday. One Dad tells me that we must invite them round again soon; he likes the way I cook.

One Reply to “Spanish, no flies”