I don’t know how authentic any of the Moroccan food I’ve eaten is. Certainly, none of it has been consumed in Morocco – I’ve eaten in plenty of cous-cous restaurants in France, though. There’s an undercurrent of very particular, seductive spicing that runs through all of the tagines and cous-cous dishes I’ve had there. 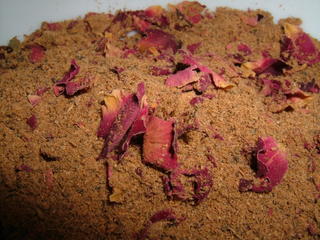 That undercurrent is Ras al-Hanout, which is Moroccan for Top of the Shop. It’s a blend of spices which varies from maker to maker, but which usually contains about twenty different ingredients, including nutmeg, lavender, nigella, cardamom and other good things. A pre-blended Ras al-Hanout is available in the UK from Seasoned Pioneers (Sainsbury’s carry their dear little foil packets in its exotic foods aisle), and it’s extremely good; the list of ingredients on the packet includes lavender buds and the rose petals you can see in the picture.

I’ve got some friends coming round for dinner, and they love complex, spicy foods. I rub the Ras al-Hanout (with some extra coriander, cumin and nutmeg which I’ve ground in the mortar and pestle) into some lamb neck fillets, brown them, add some diced aubergine, garlic and tomatoes. 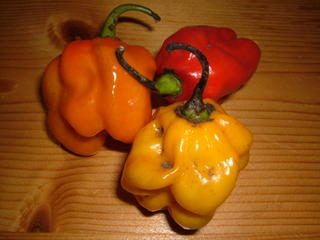 If they want spicy, they’re going to get spicy. I’ve got my hands on some Scotch Bonnet chili peppers, which are among the hottest chilis you can buy in the UK. (They get 100,000 – 350,000 points on the Scoville scale; this is obscenely hot.)

I’m not going to slice one of these chaps open, because it’ll kill everybody who tries to eat my lamb. I drop one, whole, in with the tomatoes; it should infuse the dish with its heat in a more gentle way than it would have if I’d cut it open and unleashed its seeds. Much of the heat of a chili pepper is in its seeds and in the white ribs which support them inside the fruit. These are delicious little peppers, but they need treating with a great deal of respect if you don’t want chemical burns. 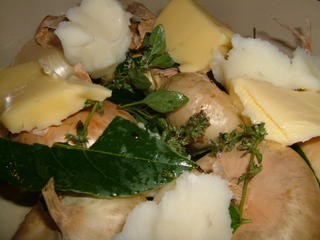 While the lamb simmers, I roast some Borretane onions, which Sainsburys are doing at the moment in their Taste the Difference range. These are tiny little onions, about the size of a ping-pong ball, which roast to a beautiful, caramel sweetness. I put them in an enamelled, cast-iron baking dish, tuck thyme, oregano and bay leaves from the garden in among them (I nearly tuck in a nicely washed snail, too, but that’s another story), and slather them with literally heart-stopping quantities of butter and fat from a duck I roasted a couple of weeks ago. (This is not Moroccan. This is just tasty.) 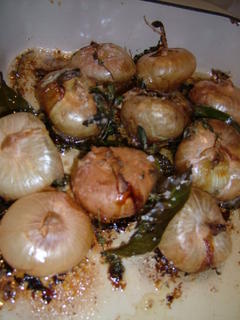 After an hour at 180c, the onions are sizzling in their papery skins, ready to be popped out and smeared on some bread, along with their buttery juices. The aubergine and tomato have melted into a spiced sauce for the lamb, which is tender and fragrant (and not very photogenic).

One Reply to “Spices and niceness”