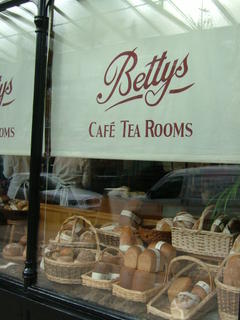 I married Mr Weasel not just for his charm and good looks, but also for the fact that he does the washing up, sharpens a knife like a pro, and has parents who live in Ilkley, a beautiful town in Yorkshire which boasts one of the best teashops in the country.

High tea is a tradition which has clung on boldly in Yorkshire, when the rest of us are spending our Saturday afternoons eating crisps in front of the television. When we visit the family, we are usually treated to a huge table on a Saturday, piled with scones, curd tarts, jams, toast, cakes, muffins – and endless cups of excellent tea.

Betty’s Tea Rooms are a strange thing indeed in a town fifteen miles from Leeds, Leeds being full of the sorts of places footballers eat. Betty’s is an old-fashioned teashop of the kind you read about in dismal Somerset Maugham stories about margarine and the death of hope, but without the death and the margarine. Betty’s is emphatically not dismal. Betty’s is a glorious beacon of lightly browned carbohydrate and gloopy, gloopy, sweet sauces. 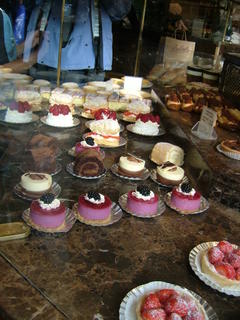 I should remark at this point that the quality of the photographs in this post may be a little . . . rubbish, since I loathe and detest wandering into restaurants, tea rooms, bars and cafes and pointing my camera at things. I am half-Chinese, and I become terribly paranoid that people are casting me in their heads as a strangely grumpy-looking Japanese tourist when I pull out the camera. This leads me to try to photograph things in secret, which isn’t a recipe for good pictures.

Nobody wanted to go to Betty’s. We’d already eaten enough lamb to keep a (smallish and reasonably delicate) rugby team nourished and warmed for the day at lunchtime, and it hadn’t gone down. I bullied my mother-in-law and husband into accompanying me with the promise of cakes. 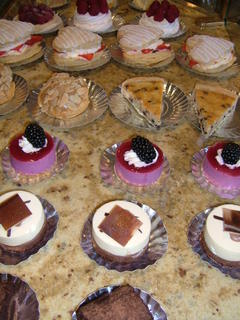 Cakes there were by the dozen. Beautiful, jewel-like cakes; the sort of cakes you expect to see lined up in a Paris branch of Hediard or Laduree. Gleaming counters of the things stretched as far as the eye could see; cakes laid out in glistening rows on cool marble, topped with shining, jellied fruits, palpitating curds and elegant piping.

My mother-in-law and Mr Weasel perked up.

Betty’s was opened by a Swiss confectioner in 1919; the first branch was in nearby Harrogate. The company has stayed small, keeping its few tearooms in Yorkshire while marketing its teas around the country as Taylors of Harrogate. The staff wear starched white aprons and black skirts, and the tearooms themselves have a real sense of 1920s’ style. The menu still has a Swiss influence in this unlikely place, the savouries menu featuring rosti with raclette and other good things.

We weren’t up to another main course, and Mr Weasel was refusing to eat anything at all (he is watching his figure in order to be able to consume more curry before erupting out of his swimming shorts when we visit India next week), so decided on a brown bread ice-cream sundae (ostensibly for me, but ultimately gargled, swilled and slurped in the most part by Mr Weasel, who was hungrier than he thought) and a custard slice for his Mum.

Brown bread ice cream is altogether more wonderful than it sounds. I seem to remember Sainsbury’s trying to sell it a few years ago; they stopped because not enough people were brave enough to try it. A shame. It’s glorious stuff. At its simplest, it’s a really good vanilla ice-cream with roasted breadcrumbs, caramelised in demerara sugar. It’s got everything; crunch, sweetness, a toasty mellowness from the crumbs and a lovely contrast between the melting ice-cream and the friable crumbs. 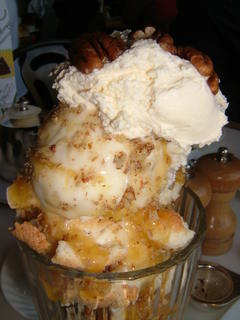 The sundae was enormous. It was also pleasantly uncomplicated; just glorious ice-cream in one flavour, crushed pecan nuts, broken amaretti, a glossy, buttery toffee sauce and some cream. Two pecans on top vanished somewhere while my head was turned photographing a custard slice.

Tea arrived. We’d asked for a pot of Darjeeling (which was described on the menu as being a tippy pekoe; I am not a tea expert, but it was extremely good) and a pot of Lapsang Souchong. Each came in a silver-plated pot with a handwritten label on the top, explaining which was which. We were given one little silver strainer per pot, lemon slices, cold milk and hot water to top the pots up with.

While the tea was cooling, we got to the important task of eating. This photograph of the excellent custard slice is slighly blurry because I feared expulsion from the family if I didn’t hurry up and let my mother-in-law eat it. She sliced it in half laterally, ate the base with a little custard and then ate the fondanty top with some more custard, all the time informing me that it is very easy to lose weight when you just put your mind to it. I do not know how she stays so thin. 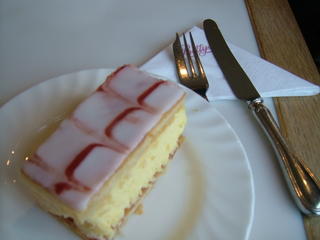 I am rubbish at cooking patisserie. It’s fantastic to go somewhere to eat things you can’t cook yourself, making Betty’s one of my favourite places to eat in the country.

Full of sugar and love for our fellow man (especially if he is a Swiss confectioner), we staggered back up the hill to the house, where a vast spread had been set out, involving cheese scones, hams, a block of cheese the size of my head, pickled shallots, a loaf of bread and a big jar of pickle. I worry I will not have room for those curries next week.

2 Replies to “Everything stops for tea”