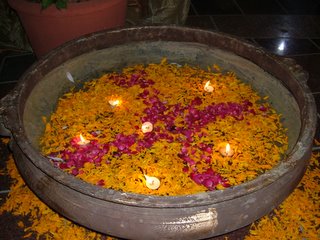 So – I’m back from the wedding in Delhi. I made a horrible mistake while eating in India – I had some salad. It appears the salad was washed in something a bit more . . . natural than what comes out of the tap in Cambridgeshire. My stomach has spent the last few days trying bodily to escape from its housing, and as of this moment is making interesting treacly noises. As a result, you’re not going to get as food-centric a post as usual, because I’m finding food a bit difficult to contemplate right now.

Food plays an important role in the various Hindu wedding ceremonies we took part in over the last week, quite apart from providing necessary nibbles at all the parties that these involved. This meant that I ended up in a New Delhi branch of Pizza Express, of all places, singing karaoke Eagles in duet with my father-in-law over slices of Veneziana pizza on Thursday night. (I did not photograph this. You all know what pizza looks like.) 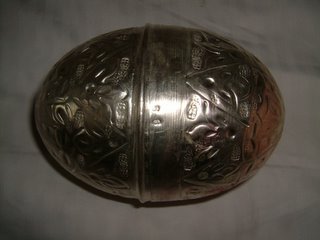 Friday lunchtime saw a ceremony welcoming the groom and his family to the bride’s family. We sat with the groom (Mr Weasel’s cousin) on the marble floor of a hotel room, where a priest and the elders of the bride’s family witnessed his intention to marry the bride – apparently this served as a kind of certification in the days before codified marriage licences. He was presented with symbolic gifts, including a silver coin for prosperity and a coconut clad in a close-fitting silver casket for fertility. He was showered with rice to symbolise nourishment, and ghee (clarified butter) was burned in a small lamp to feed the sacred fire. 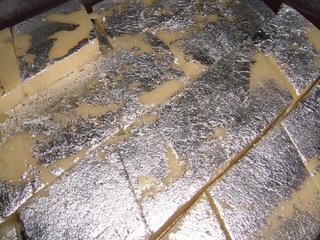 Fresh flowers, symbolising beauty, were scattered and the members of the party were given a vermillion bindhi (dab on the forehead) and a piece of mauli (holy red thread) around the wrist as blessings. The men’s bindhis had a couple of grains of rice pressed into the damp vermillion for fertility. Halwa (crushed nut sweets) were also handed around as part of the ceremony, gilded with edible silver foil. 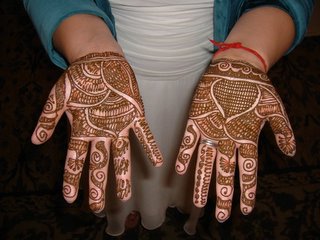 That evening, we were invited to the mehndi ceremony, where the hands of female guests were painted with henna, which stains the skin. A man rubbed my hands with citronella oil and piped henna onto my palms using a paper cone like a tiny icing bag. The patterns on my hands eventually turned a dark red, and are only starting to wear off a little at the fingertips now, four days later. The patterns are merely decorative and don’t symbolise anything, although the bride’s patterns include the initials of her groom, and it’s said that the darker the pattern, the greater her mother-in-law’s love. (A cousin of the bride suggested rinsing my hands in lime juice and sugar to deepen the colour – a South African friend who had mendhi at her own wedding swears by daily application of Vaseline to keep the colour dark for longer. I’ve done both.) A buffet of curries and the fatal salad were served to the guests – I’ll write more about the food tomorrow when my stomach and my the food I’m writing about don’t seem quite so viscerally linked. 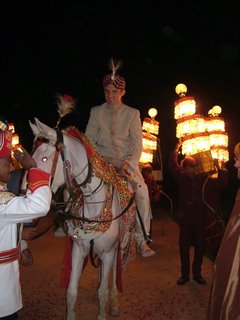 More food symbolism came into play on the day of the main ceremony, where handfuls of rice were kept at the ready. The groom rode a white horse (a remarkably placid horse, given all the fireworks and flash photography), followed by a very well-dressed brass band and men carrying glowing lamps. My sister-in-law, as the nearest female relative of his generation, threw turmeric and rice on him, and then threw more sweets and some rupee coins into the road beneath the feet of the horse, to banish evil spirits. His family and members of the party danced in front of the horse, keeping him from leaving the place where his new wife was waiting. 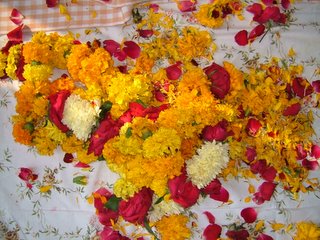 Flowers were everywhere. Darkly-scented Persian damask rose petals were fired from firework drums, the crowd threw more rose and marigold petals, all the guests wore marigold garlands, and the stage and bowers where different parts of the evening’s ceremony were to take place were strung with thousands of stephanotis blossoms. The groom was welcomed into a pavilion by the bride’s female relatives, and painted with a new bindhi. He was joined on a throne on a platform by his bride, and they exchanged rose and stephanotis garlands to cheering from the crowd. They then went to a smaller canopied area, where the marriage was blessed, and where they walked seven times around a sacred flame.

We’ll get back to serious discussion of curry tomorrow, when my stomach has settled enough to contemplate it. India was truly remarkable; we made some new friends and learned plenty of new things. In the meantime, I’m feeling enormously privileged to have been to this really remarkable wedding, and wondering whether it would be practical to marry my husband again so we get to play in all the flowers.

One Reply to “Delhi belly”