Mr Weasel and I are still feeling rather jet-lagged and delicate. It’s also the cold season, and my office, which I share with six people, has a horrible miasma of runny nose.

If I were a New York grandmother, I might have prescribed chicken soup with matzoh balls for what ails us. As it is, I’m the product of Malaysian Chinese and British families. As we all know that the English are bred to maximise upper lips and minimise tastebuds, I decided that what we needed was a nice bit of soothing Malaysian cookery – Hainanese chicken rice.

Hainan is a southern island province of China. Many of the Chinese living in Malaysia and Singapore originated in Hainan, and they brought their recipes with them. This chicken rice is probably the best known of these recipes, and it’s a wonderfully soothing, clean-tasting dish. The chicken in this dish is poached, and its cooking liquid is used to cook the rice, flavour the chili sauce that accompanies the meat, and to make a clear broth.

Chicken and broth
One chicken, without giblets
Four pints water
Chicken stock cube
One teaspoon salt
1/2 teaspoon MSG (go on – you can leave it out if you absolutely must, but it won’t kill you)
Wine glass of Shaoxing rice wine
Two tablespoons of light soya sauce
Thumb-sized piece of ginger, sliced
Ten cloves of garlic, squashed lightly with a knife blade
Two large spring onions (scallions)

Begin by bringing the water, stock, salt, msg, rice wine and soya sauce to a rolling boil. Pull out any poultry fat from the inside of the chicken, and put it in a dry frying pan on a medium heat to render out the fat. Stuff the chicken with the ginger, garlic and spring onions, and place it in the boiling water. Bring back to the boil for two minutes uncovered, then put the lid on and simmer for 40 minutes. It’s helpful if you use a heavy, thick-bottomed pan like one by Le Creuset, as the heat will disperse better and you will avoid catching the bottom of your chicken. 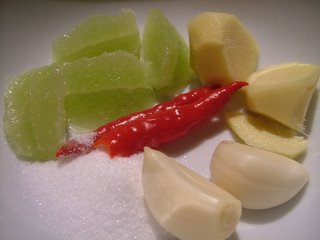 Meanwhile, place all the ingredients for the sauce except the chicken stock in a blender (or you could use a pestle and mortar. I’m lazy and use the Magimix). Lime doesn’t give up its juice readily like a lemon, so the best way to get all of the juice out is to quarter and peel the lime by hand as in the picture, then process in the Magimix.

I don’t want to make the sauce too spicy here, so I’ve removed the seeds and the white ribs from these chilis. The hottest part of the chili is these ribs, and then the seeds. Removing them still leaves this sauce very hot indeed; use more or less chili as you wish.

When the chicken has been poaching for forty minutes, remove it from the cooking liquid and put aside. Add half a wine glass of the stock to the pureed sauce ingredients, and mix well. (This isn’t a great photo – I’ve sloshed the sauce about a bit here. It tastes fantastic, though.)

I had run out of Thai fragrant rice, so used basmati for this; you may prefer a stickier rice. I always use a rice cooker, so I put my rendered fat in with enough rice for two, stir well to make sure all the grains are coated, and fill the rice cooker with the chicken broth up to the two-portion line, as I usually would with water. 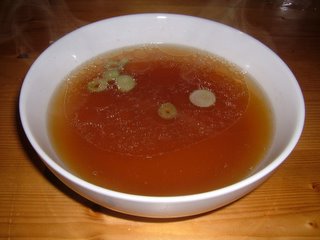 The broth is served alongside the chicken and its flavoured rice as a soup. It’s got a tiny amount of glossy fat from the chicken floating on it, and it’s clean-tasting, clear and delicious. We prefer to eat it as a starter before serving the chicken and the rice, which isn’t traditional (but I defy you to have a kitchen smelling of this stuff and not eat it at the first opportunity). Any broth you have left over can be frozen and used as chicken stock. It’s surprisingly successful used as a base in Western dishes – try it in gravy and soups.

This dish would usually be served with some sliced cucumber. I don’t have any in the fridge, so we’re just eating the chicken and the rice on its own. I’m rubbish at carving, but thankfully Mr Weasel, a butcher’s grandson, has meat-chopping in his blood, and sets about the chicken (in Malaysia it’s always eaten at room temperature, which I prefer – the chicken is somehow much juicier this way, and the muscle tissue relaxes and makes the meat tender and toothsome) with abandon. And a very sharp knife. 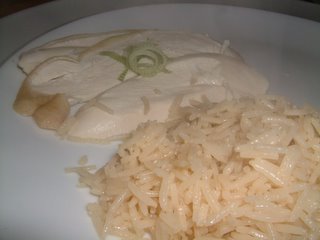 The hot rice has taken on all the flavour from the broth, and a gorgeous sheen from the fat. It’s a glorious contrast with the, moist, tender chicken. The meat is served with the dipping sauce and a bowl of soya sauce. Any cold bug that might have been thinking of settling has given up in the face of all this nutrition and gone to pester the neighbours.