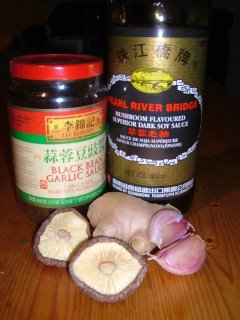 Tonight, I feel like something Malaysian. Wandering around Tesco, I realise it’s my lucky day; one of my favourite cuts of meat in Chinese and Malaysian terms is pork belly, which is full of flavour (and full of fat – but where do you think that flavour comes from?), and which becomes sticky and rich when braised for a long time. (It also makes a wonderful, crackling roast, which I hope to explore in a later post.) Pork belly is not a remotely popular thing in the UK, and, absurdly, this very tasty cut is only £1.50 for 160 grams. I look around at the grim women pushing joyless trolleys full of chicken nuggets and frozen pizzas, and think unrepeatably uppity thoughts. There is nothing like a Friday evening spent simmering things that smell nice, and feeling smug. 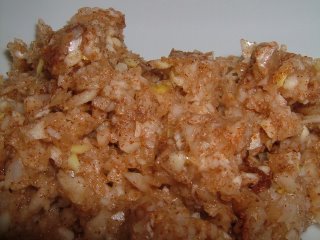 This dish uses cinnamon, which you may think of as a dessert spice. Try it with the meat in this recipe; you’ll add it at the beginning, in a paste with the onions and garlic, where it becomes beautifully aromatic. You’ll also need some black bean and garlic sauce, which is available in Chinese supermarkets, and a good five-spice powder.

Proper five-spice powder contains Szechuan peppercorns (not really a pepper, but a dried berry), star anise, cloves, fennel and more cinnamon. A good source in Cambridge is Daily Bread, a wholefood warehouse where they grind their own spices. They sell spices in containers of different sizes; little plastic bags, jam jars and enormous great sacks. (It’s a pretty inexpensive way to buy spices; if you’re in the area, give them a try. They are Christians of a slightly maniacal bent, but hey; the spices are good.)

Babi chin is another dark and rich recipe, and good for warming you from within. You’ll need the following: 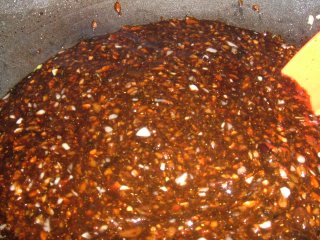 Chop the onion and garlic as fine as possible in a blender with the cinnamon. Heat the oil and fry the onion, garlic and cinnamon mixture until golden. Add the black bean sauce, the soya sauce, the five spice powder and sugar, and stir fry for two more minutes.

Add the pork and ginger, with a glass of rice wine and enough water to barely cover it with the sauce ingredients. Stir well to mix and increase the heat under the wok to high. Boil the sauce briskly until it is thick and reduced (about fifteen minutes). Add more water (about a pint) and bring to a simmer.

Add the soaked mushrooms and the spring onions. Lower the heat under the wok, cover it and simmer, stirring occasionally until the pork is meltingly tender (aim to be able to cut it without a knife). If you feel the sauce is too thick, add a little more water. Serve with rice. 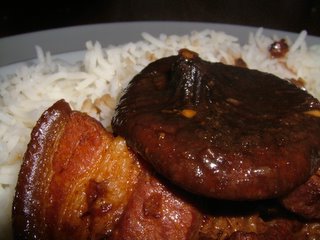 This is beautiful, glossy, and syrupy. If I were in Malaysia, I’d have put some sugar cane in there with the pork. Sadly, I’m in Cambridgeshire. Sugar cane is not really considered a commodity over here. I need a holiday somewhere where interesting things grow.