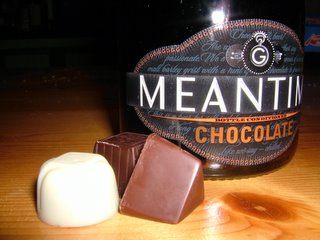 Meantime Chocolate Beer, from the Greenwich brewery, is, they say, specifically aimed at women, who, according to those marketing it, drink alcopops in preference to beer. Nonsense. Some of the best nights (and worst mornings) of my life have been courtesy of the Cambridge Beer Festival, where both Mr Weasel and I have ‘worked’ (I use the term advisedly) as staff in previous years. One of the things that swung the choosing of our present house for me was its handy location next to a real-ale freehouse with a fantastic restaurant (nothing like having your Fenland ale within staggering distance – those who email me and appear reasonably sane will be told where it is, but I’m not publishing its name here for fear of people breaking into the house to steal my cake). Beer and I have a glorious, long and ultimately pretty intimate relationship. Girlie beers are not for me.

Or are they? A while ago, when Sainsbury’s started stocking Meantime Chocolate Beer, I thought I would try an experimental bottle of the stuff. Damn me if they haven’t come up with something grown-up, silky and both beery and chocolatey at the same time. I may be a real-ale bore, but this stuff, marketed to death and not out of a pump (it is, however, bottle-conditioned, which means that new beer and yeast is added to the finished beer in the bottle, making it finish its fermentation and develop fizz after the lid has been put on) is just magnificent. There’s not a hint of sweetness to it; any chocolate flavour is the smooth, dark, dry taste you get from a very high cocoa-mass chocolate and not overpowering, and it combines beautifully with this extremely malty, quietly hoppy beer to make something quite disturbingly drinkable. A note of vanilla ties the malt and chocolate together. This is definitely not a novelty beer. If you’re in Sainsbury’s, pick up a bottle; I think you’ll like it. 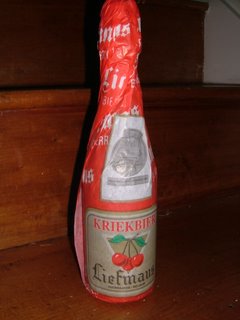 Now, clearly, buying only one bottle of beer would be the action of someone who wasn’t thinking awfully hard. I was thinking hard. So I bought another. My second bottle was one of Liefmans‘ utterly gorgeous Kriek, or cherry beer, which comes wrapped in a pretty twizzle of printed paper.

Liefmans Kriek is considered one of the very best cherry beers. (Kriek, by the way, is pronounced ‘Creek’, if ever you are in Belgium and struck with a terrible craving.) It’s an unexpectedly sour drink which almost makes your mouth pucker; tart and fruity, but rounded and terribly, terribly delicious.

The beer is a deep, wine-red, with a pretty pink head. (No photograph in the glass, I’m afraid; I forgot to take one before I started drinking, and the glass has lipstick and fingerprints on it. Disaster.) It’s unfiltered and unsweetened (important, this; lots of cherry beer is sweetened, and it’s not anything like as good), and so full of cherries they almost dance in front of your eyes as you sip it. There’s a hint of almond, possibly from the cherry stones. It’s like a wonderful fruit juice. A wonderful fruit juice that makes you fall down and giggle.

Yeast. This week it’s my number one microbe.

3 Replies to “Beer or pudding?”