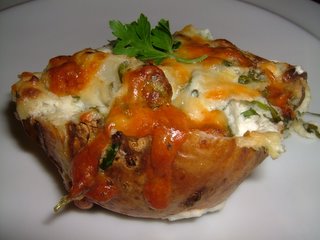 A few weeks ago, I mentioned that the pub baked potato, a horrid thing which usually comes with a raw, solid middle, a charred outside, and insufficient cheese, does its genre a great disservice. The baked potato can be fantastic; a thing of creamy beauty.

American readers whill be shocked to learn that I had never come across the twice-baked potato until February this year, when, skiing in Nevada, I had a sudden and terrible craving for carbohydrates. A nice man agreed to sell me a steak with a choice of accompaniments, among which was a twice-baked potato. I had to ask what it was. He looked at me as if I were wearing an even stupider hat than I actually was, and explained that the twice-baked potato is a potato baked as normal, with the fluffy flesh scooped out and mixed with butter and other good things, placed back into the shell, and baked again until piping hot. 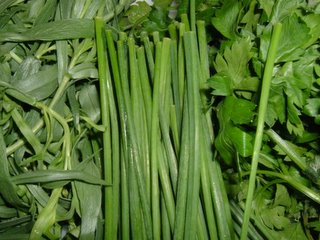 When the nights are cold, dark and depressing, some fresh herbs in your dinner will work magic in making you feel summery. I used flat-leaved parsley, tarragon and chives. I wanted the potatoes’ flesh to be really fat and creamy, so looked out for some full-fat cream cheese to beat into them. Full of cheeses, butter and all those carbs, this is not a slimming recipe – but then again, if you want to keep the cold out, you’ll need a layer of fat under your jeans. For four potatoes you’ll need: 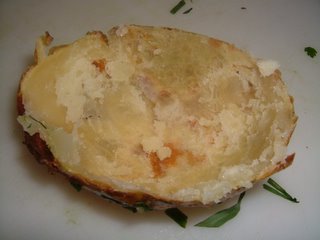 Rub the potatoes with the olive oil, and sprinkle with a coarse-grained salt. Bake at 200C (450 F) for an hour and a quarter. When they’re done, slice them in half and, holding the potato in an oven glove, scoop out the flesh. You’ll be left with a nice little potato-skin container.

Combine the soft potato flesh with the cream cheeses, herbs and garlic in a large mixing bowl, and thrash about it with a fork until everything is combined. You don’t want a completely smooth mixture; just make sure all the ingredients are dispersed equally. Don’t salt the mixture; there will be enough salt in the cheeses, and you’ll also be able to taste the salt on the lovely crispy skins. 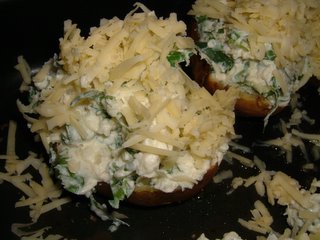 Pile the mixture into the potato skins in the dish you baked them in, and sprinkle the cheese over evenly. Put everything back in the oven for another twenty minutes. Eat with or without a ski hat, but do try not to spend so long taking photographs that they go cold.