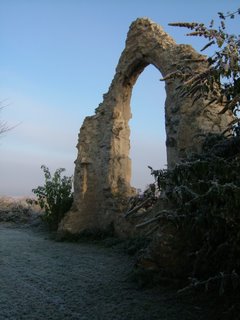 This week’s Weekend Herb Blogging post (organised by Kalyn from Kalyn’s Kitchen) couldn’t be conducted from the garden, because most of the garden is either hidden under mulch or looking very, very sorry for itself at the moment. Winter finally arrived in earnest last week; our absurdly long, warm autumn (something to do with African winds, according to the weather forecasters) has gone, those warm winds replaced by something much less friendly from the north. It’s freezing, but very beautiful. Time to take a quick picture of the ruined church next door, and go and find some herbs growing wild somewhere.

We live at one end of the Devil’s Dyke, an Anglo-Saxon earthwork which stretches for seven miles in a perfectly straight line. It’s an internationally important Site of Special Scientific Interest (SSSI); the chalk grassland along the length of the dyke is untouched and provides an environment for some very rare plants and animals, including the pasque flower, lizard orchid (which smells dreadful when in flower – a lot like unclean stables) and the exceptionally rare chalkhill blue butterfly. It’s a great place to walk and find plants, and there are usually very few other people out walking along it, so it’s very a peaceful and pleasant way to spend an afternoon. 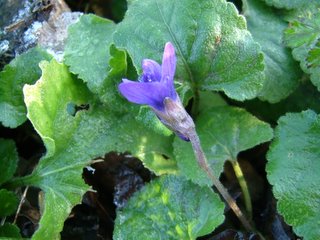 The very warm autumn has meant that some plants along the dyke have become confused and are flowering now, when they should be flowering in the spring. I found this violet (in a clump with several others, all pushing boldly through the frost) flowering several months early, not having realised it’s November. Violets are a lovely plant to cook with; I’m currently on the lookout for some violet essence to flavour fondants with at Christmas (at the moment it looks like I’m going to have to send away to France for it), and the flowers, crystalised, are beautiful as well as delicious. These violets were smelling glorious. The leaves and root as well as the flower carry the soft, powdery scent, and can also be used in cooking; the leaves are slightly tart but scented, and can be used in a salad or made into a tea, and the roots are used medicinally in cough syrups. It’s very sad to see them flowering now, knowing the frost will kill them in a couple of days; I look forward to the violets in the garden flowering next year. 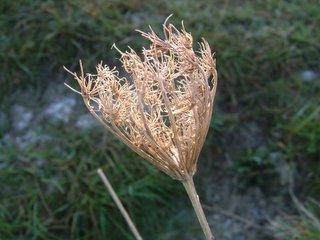 Further along the dyke, I found the dead seedhead of a wild carrot. This is the ancestor of the carrot you grow and eat at home; it has a tap root like the modern carrot, but this tap root is white and more spindly than the carrots we use. (You may know this plant by its colloquial name, the Bee’s Nest.) Pick the root young if you want to eat it; it quickly becomes too woody to be eaten.

The whole plant, when green and juicy, smells aromatic and carroty, although the root is not as tasty as the cultivated sort, being rather bitter. The whole leafy part of the plant can be used in a tea, and used to be used widely as a medicinal herb, as it is rather diuretic. It can also be added as a cooking herb in stews, giving a fragrant, carroty flavour.

The wild carrot’s seeds are also used in cooking and folk medicine; they have a warm and toasty taste and are good on top of breads. The flower heads, when fresh, can be battered and fried like elderflower heads, and are really delicious; I’ll write a post on them in the summer.

Next weekend’s herb blogging is going to be awkward and will require some thought – I shall be in Prague for the Christmas markets. I hope the hotel has Internet access – watch this space!

5 Replies to “Wild carrot – and violets in November!”