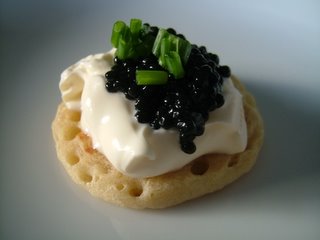 Caviar. It’s expensive, it’s delicious, and we’re being encouraged to avoid it to save the Beluga sturgeon from extinction. Being an impoverished fan of the pressed salted stuff, my little heart leapt on reading that Waitrose were stocking Onuga, a ‘completely natural . . . caviar substitute’, which, according to their advertorial piece, has a ‘smoky. . . clean, fresh taste’. The man behind it, Patrick Limpus, is full of the ethical values contained in his little black pots, and says: ‘I love caviar, which is why I’m so proud to have come up with a worthy – and delicious – substitute.’

What follows is entirely my own fault. I used to work in magazine publishing, where one of my jobs was to edit adverts posing as real articles like this; I knew what the Waitrose magazine was doing, but I was still intrigued. I remained intrigued even when I looked at the tiny (and relatively expensive at £6) jar and read the words ‘reformed herring product’. It’ll be lovely little herring eggs, I posited. Dear little herring eggs that the nice man from the magazine has made salty and tasty for me. I love fish roe. I will walk miles for flying fish roe (tobiko) sushi (which is also a pretend fish roe product, not tasting of much on its own; the Japanese flavour and colour it until it’s something approaching manna), and I’d sell my soul for proper caviar. I knew I was going to be on my own at home all day on Sunday (Mr Weasel has to hand his thesis in on Wednesday, after several years of hard mathematical slogging, and is hiding in the lab polishing his diagrams), and decided I deserved a lunch of dear little herring eggs on blinis to cheer myself up in my solitude. 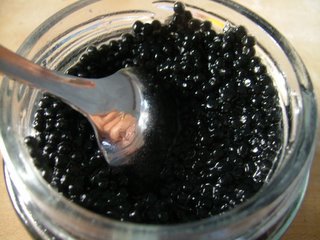 It started promisingly enough; the little black dots did look like fish roe, and on opening my precious jar I put one on the end of my finger, and licked. I pressed my tongue to the roof of my mouth, expecting the little egg to pop and release its delicious, oily juices . . . nothing. I chewed. Ah. That’s what they mean by ‘herring product’.

A little further reading revealed the true nature of my little jar of fishy punctuation marks. They’re reconstituted herring meat mixed with a seaweed product to make them gel into little balls, which are then salted and coloured with ‘vegetable carbon’. They taste like chewy taramasalata.

Onuga’s website makes it pretty clear that the emphasis in developing the product was on the mimicing the appearance rather than the flavour (or the incredibly important texture) of true caviar. ‘Onuga . . .’, they say, ‘. . . not only looks like the real thing but it tastes delicious too’. Delicious. Not ‘like caviar’. They claim it’s effortlessly superior in taste and texture to plain old lumpfish roe, which at least pops for you, rather than rolling round and round your mouth like pellets of fishy denture fixative. 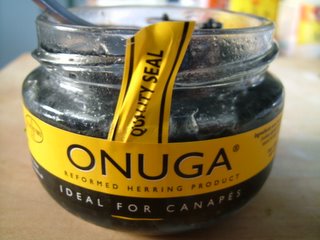 The flavour is pleasant, but I feel I’d have been a bit better off with a tub of Waitrose’s very good premium taramasalata, or with a pack of smoked salmon. The texture is a disaster.

I’ve made twelve blinis. After piling all of them with creme fraiche, Onuga and chives, I eat three, and then I do something unheard of in this house – I throw the rest away.