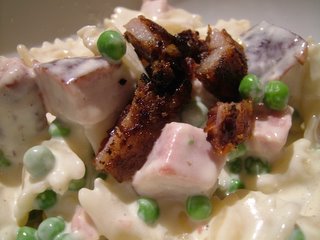 Now, while I might rail against Nigella Lawson’s approach to ham in cola, I am full of gratitude for her inclusion in Feast of a recipe for Pasta alla Medici, using any remaining ham you might have from the chunk you boiled the hell out of the day before. I’d last eaten it decades ago, and had been looking for a recipe ever since.

When I was twelve or so, a pamphlet was deposited on our school desks. It came from a company (pre-Internet, this) which would fix you up with a penfriend in a foreign country, depending on which boxes you ticked. (I don’t recall an ‘eating’ box to tick under the ‘hobbies’ heading; I think I ticked something typically precocious along the lines of ‘classical music’ and ‘visiting museums’. It is not surprising that girls on the school bus used to save pockets full of breakfast cereal to put in my hair every morning.)

There were also boxes to tick on the age, nationality and gender of your desired penfriend. Being newly possessed of all kinds of exciting hormones, and also possessed of a very overactive imagination, I decided that the thing every twelve-year-old English schoolgirl required for a full and satisfying life was a seventeen-year-old, Italian, male penfriend.

Fortunately, the penfriend company saw me coming, and allotted me a twelve-year-old girl. She was Italian, though, and she liked reading and music too, so we suited one another rather well, and wrote to each other (in English; my Italian remains limited to deciphering menus and asking the way to the museum) for years.

Eventually, Lisa and I had been writing to one another for such a long time that our parents decided we should visit each other. Her family lived in a beautiful flat in Genoa, where I went to school with her for a couple of weeks and discovered marron glace ice cream (my Mum had sent me to Italy saying sagely: ‘in Italy you can buy ice cream in every colour of the rainbow’, and I must have annoyed the hell out of Lisa’s family by obsessing about finding one in each colour).

Lisa’s Mum was a doctor, and didn’t have much time at home. When she was at home, she was not, in retrospect, a very engaged cook, and the Findus Crispy Pancake was my introduction to an Italian mother’s kitchen. Later that week we ate bollito misto (which translates roughly as ‘mixed boilings’, and was about as appetising as it sounds).

One thing, though, that Lisa’s mother cooked and cooked exceptionally well, was a really fabulous pasta dish, with sweet little peas, ham, and a creamy, buttery parmesan sauce. I asked her what it was called (although not for the recipe; my own mother didn’t like me cooking at home, since I did what I do now and sprayed the walls with food when cooking), and was delighted when she cooked it again twice before I left.

Pasta alla Medici is a very simple recipe, but is also, for some reason, a very hard one to find in books. I had to wait nearly twenty years before I came across Nigella Lawson’s recipe, and I am gushingly, pathetically grateful. She offers this three-person recipe as one which children will enjoy, and her portions are child-sized – make a larger amount if you’re feeding adults.

Cook the pasta following the packet instructions, and after five minutes add the peas to the pasta water. When the peas and pasta are cooked, drain them. Warm the rest of the ingredients through in the pan you cooked the pasta in, then add the pasta and peas, toss to coat, and serve.

I added a few gratings of nutmeg to Nigella’s recipe. I also stripped some of the white fat off the ham I had cooked the day before and dry-fried it until crisp, adding a tablespoon of maple syrup and a pinch of cinnamon at the end, bubbling the syrup down to a caramel. I used this crisp, sweet crackling to dress the pasta. This is, however, mostly because I am greedy; you’ll probably be perfectly happy just eating the pasta on its own.

One Reply to “Pasta alla Medici”