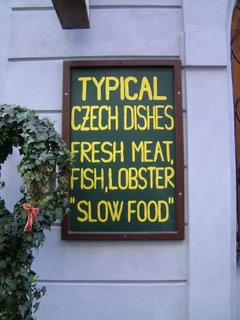 I think they knew I was coming; nothing in the world is more likely to get me into a restaurant than the words SLOW FOOD in great big yellow capitals.

I am delighted to note that every single restaurant menu in Prague appears to be bi-, and occasionally tri- and quadri-lingual, so ordering is a doddle. This sign was displayed outside a restaurant called U Modrého Hroznu (Husova 15 Praha 1 – Staré Mesto). It’s next to a beer hall frequented by Václav Havel, the ex-president (it was shut this morning; I’ll try to post from there later in the week), and good smells were seeping out through the cracks around the door. We spent about thirty seconds wondering just how we would feel about dumplings, decided that those feelings were mostly positive, and went in.

The restaurant is tiny, and has two rooms; the one we were in has only three tables, so if you’re going in the evening you’d be well-advised to book.

Our waiter was strangely dour. I can only surmise that his puppy had just died. We grovelled with gratitude over the excellent food, beamed at him, told him how happy we were to be in his beautiful city – and were rewarded with a stubbly glare which later degenerated into an outright snarl. No matter. The food was coming thick and fast, and my, it was good.

Czech food is heavy. This is a country where protein is king, and offal is treated with the respect it deserves rather than being consigned to emulsified bags of pulp, fried and fed to schoolchildren and cats, which is what we seem to do with it in England. Dumplings there were in profusion. I had spoken earlier to a Czech lady who told me the story of her parents’ courtship; her father had nearly jilted her mother a week before their marriage, when she first cooked him a dumpling. ‘It was like tennis ball, or dinosaurus egg’, she said. ‘Fortunately she also was very pretty.’ The dumpling clearly occupies an important place in Czech culture which elevates it to the position of National Preferred Starch, and is, apparently, surrounded by all kinds of arcane etiquette. Perhaps our attitude to dumplingkind was what was making the waiter so grumpy.

Flavoured butters arrived. The red one was pounded in a pestle and mortar with sun-dried tomatoes and a very strong onion, the round yellow one with roast garlic. The long sliver is a beautifully lactic and sweet butter of the kind it’s easy to find on the continent and almost impossible to get your hands on in the UK.

Mr Weasel and my Dad led the field in beer-ordering. Only one was on offer in this restaurant – a pale, wheaty Pilsner with a glorious flowery aroma. 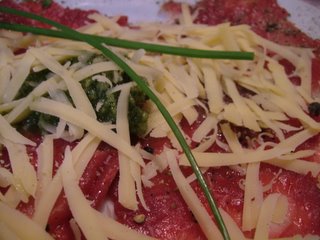 Intent on the whole Czech experience, I ruined it all by ordering something Italian for a starter – a carpaccio of beef. My Mum, across the table, had an endive and carrot salad with a sugary lemon dressing, and Mr Weasel and my Dad opted for a pate. The carpaccio was advertised as coming with Parmesan shavings, so it was a surprise to find soft gratings of something a bit like Gouda spread about the plate, but it was extremely good; the raw steak was soft, tender and meaty. The pesto in the centre of the plate was home-made and sharp, but again made with something that wasn’t Parmesan; it was still very good indeed. 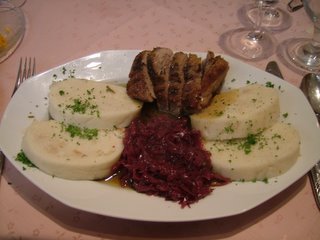 The main course arrived, heavy with dumpling. These were bread dumplings (that which looks like moulded potato around the edge of the plate), and I had been expecting something small and round; instead we got slices of something loaf-shaped. (I found a recipe here if you feel like having a go. The dumpling is so light that it has to be sliced with a thread.) The dumplings were airy, and soaked up the rich, reduced sauces with our meats. In the picture is a pork potroast which was strangely delicious, but somehow not entirely European. The glossy, dark sauce had been spiked with a light soya sauce and some sesame oil; the richness of the sauce, the thick meat and the light-as-air dumplings were a triumph together.

Weiner Schnitzel came, fried to a perfect gold in that delicious butter. Two goulashes (‘the best in Prague’, according to the waiter, who now appeared on the verge of suicide) were inhaled by the men almost as fast as the beer. The only low point came with the one dessert that was ordered (Mr Weasel, hypoglycaemic again); his chocolate banana was a banana dipped into Nutella. In the restaurant’s defence, it was pretty clearly a dessert marked out for children, and, as my mother pointed out, it was a very nice ripe banana. 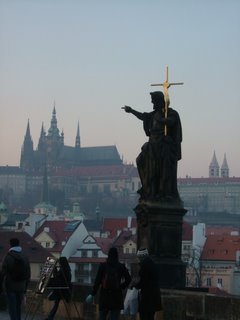 Now, clearly, it is not in your interests if I keep going back to the same restaurant every day until Tuesday. I am, however, sadly tempted. Tomorrow, I shall be investigating the Christmas market, and attempting to purchase edibles and somehow store them until Christmas for presents without eating them. Perhaps I will get something for the sad waiter and see if I can make him crack a smile.