I spent most of this morning thinking of you, dear reader, and doing my very best to take photographs of market stalls while not being noticed. Prague’s Christmas markets are the lure for many tourists (including Family Weasel), and tourists, being hungry for culture and local colour, also need feeding.

The main Christmas markets are spread out in the square in the old town, beneath the astronomical clock, and in Wenceslas square. You’ll find other, more local marketplaces scattered around the city; these sell the more ordinary fruit and vegetables and were actually where we found the best seasonal food and drink; they move around, so keep an eye out. At this time of year, there’s a lot of gingerbread and mulled wine, and lots of sweetmeats made with almonds and other nuts. The picture at the top is of a stall selling gingerbread and wrapped cakes made from hazelnuts (red wrappers) and almonds (blue).

The local almonds also emerged in yesterday’s endive salad, whole and blanched. Although indisutibly almonds in flavour (and sweet ones, at that), they’re a rather different shape from the almonds you might be used to; they are rounder and shorter, and seem to contain rather more oil.

We came across a stall selling trdlo, a soft yeast dough which is wrapped around a hot metal pin and baked into a cylinder, then rolled in ground local almonds and sugar. 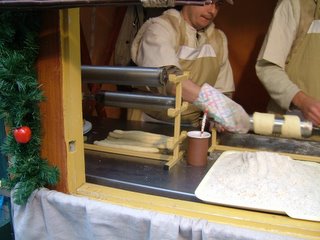 The lady on the left is rolling out the sweet dough, which has been kept warm to rise, and is wrapping it around the metal spindle. 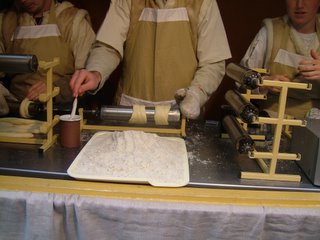 The dough is brushed with egg yolk and handed over to a third person . . . 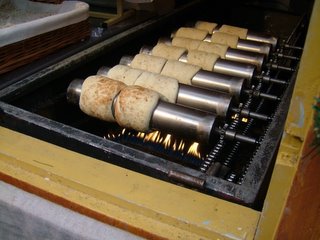 When you buy a hot, fresh trdlo, you’re gestured towards a tray of ground almonds and sugar to roll it around in as much as you like. We saw other trdlo being made in stalls which didn’t seem as even and golden as ours were. Watch your food being cooked (if you can) before you commit to buying it. These trdlo were crisp and sweet on the outside, with a beautifully tender crumb. 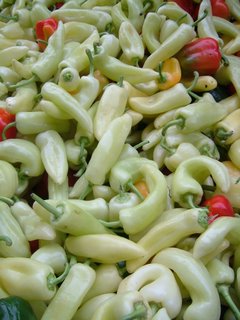 Away from the tourist areas we found a food market, where you could buy non-uniform vegetables. The greatest curse of the supermarket back home has been to encourage farmers all over the world to produce perfectly straight cucumbers, spherical swedes, beans of identical length and bananas which all curve in a sinister, congruent fashion, nesting together like bits of organic jigsaw puzzle. In emphasing shape and size, we’ve completely sacrificed taste; I promise you that you will never find a banana that tastes of cardboard in Malaysia, where they grow the things (or, it seems, in Prague, where they don’t). These peppers were a delight; different colours, different shapes (and different spiciness, according to the stallholder); you were encouraged just to pick out the ones you liked the look of.

I wish I had an oven here. 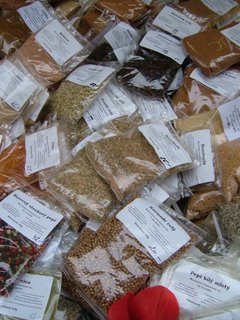 Spices are sold in little plastic bags. Although my Czech is non-existent, I was able to identify these by sight (and by helpful words on the packs like ‘barbecue’ on some of the mixtures) – I’m sure you can too. Everything looked fresh and smelled good. I bought a stick of marzipan from the lady on this stall, but unfortunately it vanished into Mr Weasel’s sugar-craving maw before I had a chance to photograph it. Every spice you’d use in a European kitchen was represented here; as well as these bags of caraway, allspice, pepper, coriander and nutmeg, tiny vials of saffron and whole vanilla pods were held behind the counter, out of the reach of shoplifters.

Shopping, especially outdoors, is crucifyingly cold at this time of year in the Czech Republic, where in the winter the temperatures seldom come above freezing. Although I was wearing what passed for ski-less ski gear, I am still, hours later, unable to feel my left ear; bring a hat. Of course, the big emphasis in Czech cuisine is on the meat. In a little supermarket I found this counter of preserved sausages. (This evening’s meal incorporated a sausage a lot like Mortadella – Baloney, for you Americans – preserved in vinegar and chilis. I’ll write about it later on.) Every part of the animal is used here, and there are vendors on many of the streets cooking and carving pieces of meat for you to eat on the move. 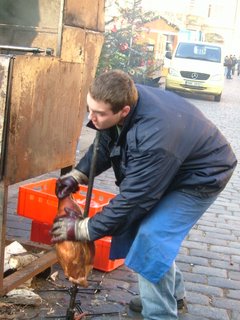 This man is preparing a piece of ham for spit-roasting. Sadly, his fruitwood-roasted ham knocked the socks off anything I’ve been able to cook at home; the whole of the Old Town Square was filled with a smoky, porky aroma which went directly from my nose to the most animal parts of my brain, persuading me to hand over my Czech crowns while trying to mask the embarrassing dribble behind my scarf. The biting cold is easily remedied with a glass of one of the many hot alcoholic drinks you can buy here. You can choose from
something called grog, which appears to be Southern Comfort, hot water, sugar and a slice of lemon (deadly and not really awfully nice; I don’t recommend it); punč (pronounced ‘punch’), which is port and brandy with hot water, sugar and a slice of lemon; and a mulled wine which has been excellent wherever I’ve bought it. If you visit Prague, you may want to try these drinks in the cafe inside the House of the Stone Bell, the city’s oldest building (in the Old Town Square, next door to a bookshop where Kafka lived). It’s now an art gallery. You can see the bell on the left of the picture; the building is well worth a visit. Happily, I failed to pupate, fall prey to an execution machine or do anything else Kafka-esque; somebody should really tell the Restaurant Metamorphosis down the road that their name is scaring me away from pushing their door open.