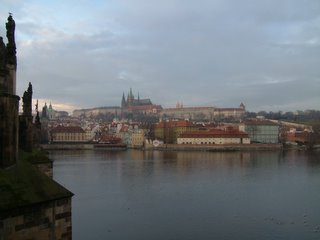 Witches are good news in Czech kitchens. A witch doll hanging up in your kitchen will, apparently, bring luck to your house, scaring away evil spirits. The life-size witch with the glowing LED eyes outside U Carodejek (Praha 1, Ramova 4, tel 222 314 957) nearly scared the Weaselarium away, but we are at heart a brave people, and went in to see what their dumplings might be like. 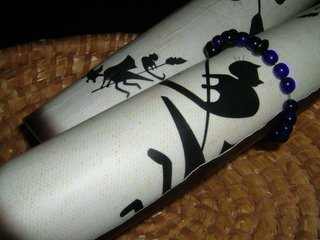 Themed restaurants. They’re usually a total turn-off, but my Mum was craving something authentically Czech, and the menu was full of the dumplings, roast and boiled meats and cabbages that are typical of Prague, so we sidled past the witch and found a table, right next to the broomstick and the empty shoes. The menu was the sort of thing which is precisely built to please my very carnivorous father; he was delighted to see something called Piggish Knee represented, alongside whole turkeys, ducks sliced in two along the spinal column and all manner of sausage and dumpling.

I think of you lot while ordering, you know. I was aware that very few people reading this blog would be inclined to wander into a Czech restaurant with a life-sized witch on the door (yes, I am kicking myself for having run out of batteries before leaving the restaurant and not photographing the thing) and order a pickled frankfurter, so I did it for you. 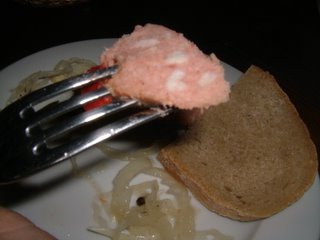 Here is my frankfurter, really a Mortadella-type garlicky sausage. It was not completely inedible. The vinegar was a sharp, white one, and the jar it lived in had been packed with hot peppers. The sausage was presented with a slit along it, one of the chilis stuffed inside. It was served with some vinegar-dressed onions, and caused all sorts of howling in revulsion from my Mum when I ate it at her. For heaven’s sake. Going into the restaurant was her choice. She enjoyed a very good potato soup, but given the keening noises she made every time I waved the sausage at her, might have enjoyed it more if I’d not been there. Oops. 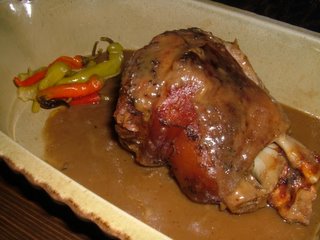 Piggish knee arrived. This picture really doesn’t do justice to the sheer size of the thing. I am still trying to work out which part of the pig this might be; clearly it is a joint, but my careful study of Hugh Fearnley-Whittingstall’s precise diagrams reveals the unwelcome fact that pigs don’t have knees that bend like ours do, and this object really did look an awful lot like my own knee, but rather more tanned. (I seem to remember from reading the Beano as a kid that the only creature that does have human-type knees is the elephant, but I don’t think the Beano is butchers’ canon.) Perhaps this was a pig-knee-equivalent. Despite it being the size of his head – a large head; we’d been trying to find him a hat earlier – Dad gobbled the whole thing making happy gurgling noises. 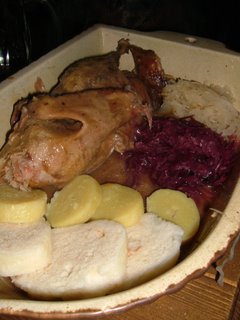 Mr Weasel fought valiantly with this half-duck, which he described as ‘primitive but pleasant’. With prose like that he should start his own blog. The bread dumplings were not as good as those we had on our first evening here, but this dish was also accompanied by a potato dumpling made with flour and a very waxy potato, which he enjoyed. My mother, recovered from her sausage dismay, ate the duck’s other half. 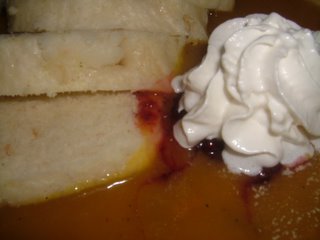 I ordered very badly; I asked for the sirloin (ha!) in cream sauce. What arrived were two thin, thin slices of pre-roast beef (I think from a gristly topside – and what an insult, this, when the rest of my family was wrestling with chunks of protein large enough to brain a reindeer with) swimming in a sweetish, fruity, watery sauce thickened with flour. A spoonful of cranberry jam was dolloped on top of the meat, and the whole thing was topped with the abortion in a can that is pre-sweetened, squirty cream. I have now spent several days wondering why, but I’m still no closer to guessing.

I ate my husband’s food while he wasn’t looking.

No deserts this time; three of us were too full, and one of us had too recently eaten squirty cream to stomach pudding. Thank God for late-opening Christmas markets overflowing with marzipan snacks and chunks of gingerbread.