Eggy from Greedy Goose has tagged me with another meme; this time, it’s the You are what you eat meme: My top ten favourite foods. This is something I’m quite experienced at; top ten foods was a favourite game of my Dad’s when I was little (but in our case we used to pretend we were selecting our last meal. Nothing concentrates the tastebuds like imminent death). So without further ado:

1. Siu Yuk – Chinese crispy roast pork belly. This is the stuff I used to save my pocket money up to eat in Chinatown restaurants when I was at school, all on my own with a book. Paradise. I swear my A-levels were 90% fat-fuelled. 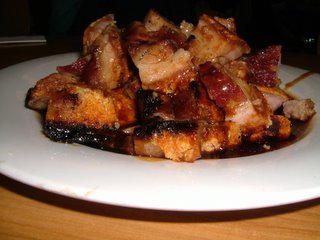 2. Unagi sushi – fatty freshwater eel, grilled in a teriyaki sauce until crisp and melting, on sushi rice. The best I’ve ever had was, ludicrously enough, 10,000 feet up in the Sierra Nevada at Samurai Restaurant in South Lake Tahoe. (I’ll be back in February; watch out for a review. Their oyster shooters, in a little shot glass with a raw quail egg, a little rice vinegar and some spring onion, are fresh and magnificent. They will also deep-fry the head of the delicate, sweet raw prawn that’s nestling on your sushi rice until the whole thing, eyes, antennae and all, is crispy and delicious. The likelihood is that the other people at your table will be too squeamish to eat theirs; this is all to your advantage. Dig in.)

3. Sauteed potatoes. Sauteed potatoes made by me, that is. They’ve got to be a floury King Edward, chopped into pieces the size of the top of your thumb, parboiled, then sauteed in very hot goose or duck fat. Once golden and crisp all over, stir in grated garlic and salt and keep stirring gently for two minutes until the garlic is cooked and aromatic, then throw in a handful of chopped herbs and eat immediately. Here are some nestling up with some boeuf en daube. Try not to dribble. 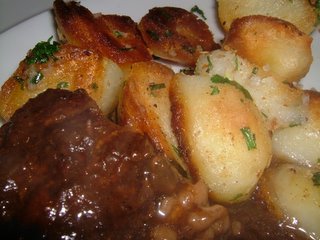 4. Oysters. Sweet, sweet little oysters, tasting of the sea and sucked straight from their shells. I discovered this year that when adding your squirt of lemon, your oyster will be further enhanced by the addition of a little wasabi, which somehow underlines the oyster’s natural sweetness.

5. Roast garlic, popped out of its skin and daubed on a crusty, warm bread.

6. Brioche, spread with a sweet butter and a tiny drizzle of strawberry jam. The brioche must be a good, plain one, full of rich egg yolks and without any vanilla flavouring. 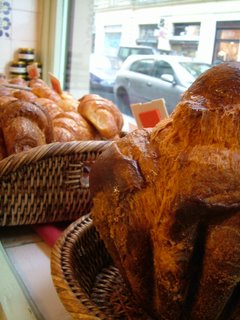 7. Chicken choke – a Chinese chicken rice porridge. This is my favourite breakfast, sprinkled with cripsy fried shallots, slivers of fresh ginger, spring onions, a little sesame oil, some fish in black beans and soya sauce. Unfortunately I very seldom have it at home – but I eat it every day when we’re in Malaysia. The best I’ve ever had was at the Renaissance Hotel in Malacca (a hotel whose rooms could be in any commercial travellers’ hotel in the world, but where the breakfasts are unsurpassed). One bowl will set you up for the day; you won’t need to eat again until the evening.

8. Foie gras. The best I’ve ever had was a cold terrine with fig compote at La Truffiere, a Paris restaurant specialising in truffles. When Mr Weasel and I used to live in Paris, there was usually a mi-cuit foie gras in our fridge; it is astonishing how the ready availability of gloriously fattened liver sublimates the urge to cook for yourself. We lived on foie gras, onion marmalade, brioche and Sauternes. We became very fat and spotty.

9. Peking duck. Proper Peking duck, with a crisp skin served first, the meat kept in the kitchen. The skin is wrapped in egg crepes so thin you can see your hand through them, with a hoi-sin type sauce, cucumber and spring onions, like the crispy duck in Chinese restaurants in the UK. The meat is then served as part of your next course, in whatever style you ask for. The best Peking duck I’ve ever had has been at Lai Ching Yuen, the restaurant at the Regent Hotel in Kuala Lumpur. Whenever in KL, we try to go to Lai Ching Yuen as often as possible; this became slightly embarrassing in the last week we spent in the city, where we found ourself in there twice in one day on the Tuesday, then twice again on the Thursday. I don’t have a picture of the duck, but here is their very superlative dim sum. 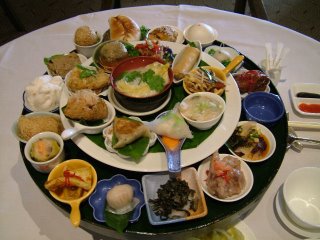 I read recently that Frankie Woo, Lai Ching Yuen’s chef, has left since I last visited to set up a restaurant on his own. It’s on the list for the next time I’m in Malaysia.

10. Fiori di zucca fritti – zucchini flower fritters. I’m growing squashes next year not for the fleshy little courgettes, but for their flowers. They’re fantastic served with the quince jelly I made a couple of months ago. There is all the difference in the world in a zucchini flower you’ve picked seconds ago, and one you’ve bought in a shop, put in the fridge and taken out, damply, later in the evening.

And with that, I think it’s time for dinner. I have to tag five people with this, so the Great She Elephant (not a food blogger, but I have observed her eating), Santos at The Scent of Green Bananas, Umami (whose front page seems to be displaying a very enticing picture of chicken porridge at the moment), The Wine Maker’s Wife and Johanna at The Passionate Cook can expect an email soon.