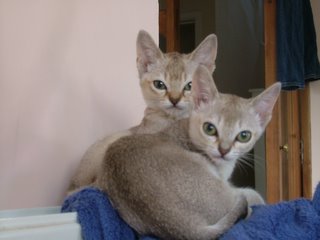 And, for those of you who are only interested in my kittens (thanks to Clare at Eatstuff for organising Weekend cat blogging), here are Raffles (back) and Mooncake (front), who have now been living with us for a week. They’ve settled right in, and Raffles has decided what sort of family this is (i.e. an omnivorous one which eats too much) and has so far stolen and eaten a slice of garlic bread, a piece of gnocchi and some creamy mushrooms. We think it’s the garlic he likes and suspect that what we’ve bought here is not in fact a pair of kittens, but two small vampire monkeys with strap-on ears.

Mooncake is quieter (and seems to prefer Mr Weasel, the little rotter), but absolutely adorable, apart from when she’s weeing on your feet in bed. This has now been addressed (we think she was scared of the dark and didn’t want to go down to their tray without Raffles, who was too busy sleeping to pay much attention) and now, with landing and corridor lights on, she’s happy to go downstairs on her own. She has, as you can see below, decided the cushions match her eyes. 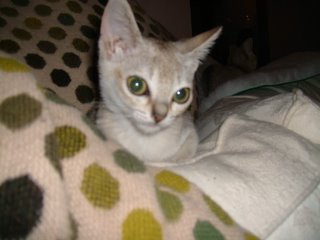 Both cats turn out to be keen typists. This week they have sent several emails (with body text saying perceptive things like ‘rrrrrrrrrrrrrttt’ and ‘~~~~~~~~~~~~~@’) and chased mouse pointers as if their lives depend on it. Here is Raffles, who has clearly started writing a blog post, become bored and passed out on some nice lady’s dressing gown. 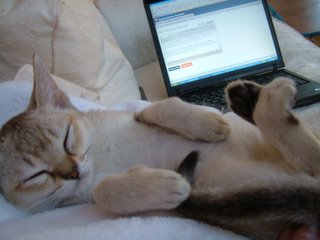