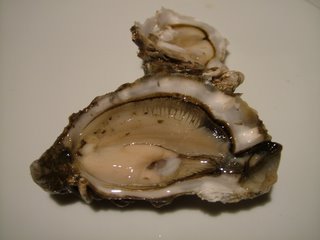 On the phone to my friend James yesterday, I mentioned that I was planning on visiting Waitrose to pick up some Christmas supplies. He suddenly became very excited and started making insistent noises about visiting the fish counter, where, he said, oysters are currently cheap and plentiful. It’s an ‘R’ month, the middle of the oyster season, and he was right; there were dozens spread out on ice for 39p each. I managed to score twelve of my favourite transexual bivalve for less than £5.

Transexual bivalve, you ask? It’s true; Tiresias, the chap in Ovid who spent seven years being a lady as a punishment for being mean to snakes, didn’t have it this easy. Oysters of the genus Crassostrea (like those we had last night; you can tell them apart from Ostrea oysters by their asymmetrical, elongated shape) decide to be male or female from season to season on a whim. (Ostrea oysters, which are scallop-shaped and symmetrical, are even more confused, changing gender at the drop of a shelly hat, often many times in one breeding season.) 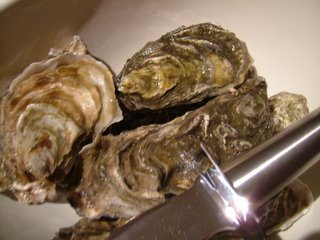 As well as having a phenomenally exciting sex life, the oyster produces pearls (sadly, the oyster you eat is vanishingly unlikely to produce anything that’s not small, brown, gritty and liable to break your teeth), can live for up to fifty years, is said to be an aphrodisiac (I’m saying nothing) and often ends up attached to a rock in the most picturesque bits of sea in the world. When I was a little girl visiting family in Malaysia, my cousin Margaret and I used to wade out into the sea where there were rocks covered with oysters at low tide, and bash the shells open with a stone, scooping the quivering flesh into greedy mouths. We were horrible children.

Eating-oysters will not be particularly venerable; the flavour becomes less good after they’re about five years old, so those you buy at the fishmongers (which are almost certainly farmed; minuscule oyster spats are encouraged to attach themselves to tiles or other collecting devices as their permanent home, and are scraped off and lovingly cared for until supper time three years later by professional oyster herdsmen) will be mere oyster striplings. 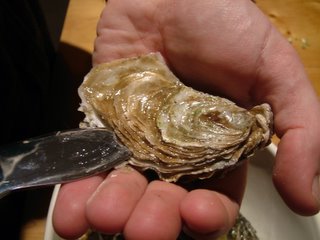 So. You’ve bought your oysters. How should you go about opening them? You’ll need an oyster knife (or another short, wide-bladed knife with a point), a towel, and a bowl to catch any juices you spill. Hold the oyster in a towel in your left hand (right hand if you are left-handed) with the curved half of the shell in the palm of your hand. The flat shell on top is the oyster’s lid. Force the point of the knife in where you can (as close to the hinge as you can manage), and twist it ninety degrees to break the muscle and pop the lid off. Use the blade of the knife to remove the meat from the underside of the lid, and scrape it into the bowl full of meat created by the curved half of the shell. You can release the meat from the bottom of the shell with the knife too, or leave it for the person eating the oyster to do it with a fork.

You need that towel. You will see from the picture that Mr Weasel started the evening considering towel-use unmanly; he changed his mind pretty quickly once he’d stabbed himself for the second time in the palm of the hand. (Those concerned for him have nothing to worry about. He says he’s very happy to be able to point at scars and say casually, ‘That? I did it shucking oysters.’) 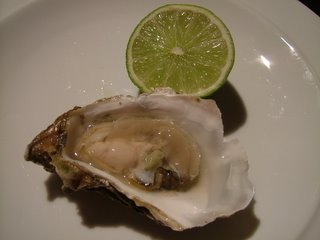 They’re nigh on perfect tipped straight into your mouth from the shell, raw and tasting of the sea, but they do benefit from some carefully chosen accompaniments. We used a squeeze of lemon, a squeeze of lime and a microscopic dab of wasabi. (When you buy wasabi, try to get hold of it in powdered form to make up yourself. If you do get a tube, do your best to find one whose ingredients list reads ‘horseradish’ or ‘wasabi’ and nothing else.) Some people use Tabasco sauce or minced shallots in wine vinegar; I find both these a bit too strong. They can hide the subtle, seashore flavour of the oyster. 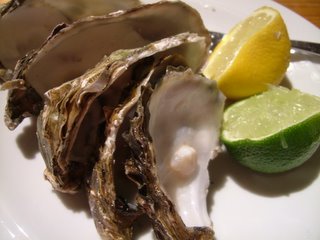 I should have bought more than a dozen. We scarfed these in five minutes flat.

3 Replies to “How to shuck oysters”