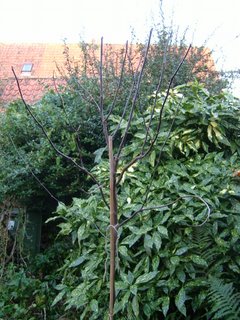 Just in time for Christmas, the fruit trees I ordered several months ago have turned up, ready for planting. I’ve wanted my own quince and medlar trees for years, but have been living in rented houses, places with no garden and abroad for all that time. When we bought our first house this year, one of the first things I did back in the early summer was to order a pair from Keepers Nursery, where they claim to have the world’s largest selection of fruit trees.

Usually, the trees would have been delivered for me to plant earlier in the year, but this autumn was long and warm, and the trees didn’t fall dormant (and plantable) until much later than usual. The quince tree (it’s a Meeches Prolific, which is bred to fruit heavily – see the picture at the top of the post) is recognisably a tree already; it’s two years old, and has lovely goblet-shaped branches. I think we’ll get good flowers from it in the spring, and if we’re extremely lucky we may get some fruit next autumn. 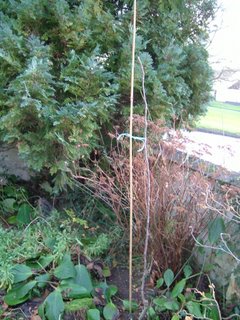 The medlar (macrocarpa) is only a year old, and is a single, whippy stick with roots on one end at the moment. The twig lashed to the garden cane (to be replaced later by a proper tree-stake) in the picture is my baby tree. There’s no hope of getting any fruit from it next year, but I’m extremely excited about it; medlars are a very slow-growing, long-lived tree, and specimens over 600 years old are known in England. It promises to be beautiful. This one is on a semi-dwarfing root stock, so it won’t get enormous, but it’ll do well in the poor soil at the front of our house. 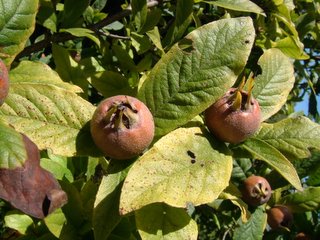 I know you all know what quinces are, because my first ever post on this blog was all about quince jelly. Medlars, though – well, they’re a forgotten fruit in England these days, having a botanical place somewhere between the pear and the hawthorn. (This picture is from a tree I found growing on a hillside in France this September.) I first came across a tree when I was at university; ouside the Law faculty in Cambridge is a standard tree about ten feet high which I used to park my bike by. It was a beautiful tree with large pinky-white blossom in the spring, and a mysterious fruit which looked like a bit like a small, brown pomegranate with an open end in the autumn. I later found out that it was a medlar with the help of an old botanical in the University Library, and collected some fruit after a frost to let it blett (the fruit of the medlar is not edible until it has sat in a dry place for a while and gone soft and brown). The taste was sweet, delicate, acid-winey and completely addictive. Given that you can’t buy medlars in the shops, and that I didn’t intend to go within five hundred yards of the Law faculty once I’d managed to graduate and escape its bloodsucking, cobwebby clutches, I decided I’d buy a tree at the first opportunity.

The medlar is an ancient tree; in 700BC the Greek botanist Theophrastus was writing about it while munching at a well-bletted specimen. It has literary pedigree too; Shakespeare mentions it in four plays (although not in particularly glowing terms – fruits which have one end which looks a bit like a dog’s bum, to be consumed when they look rotten, make for easy metaphor). 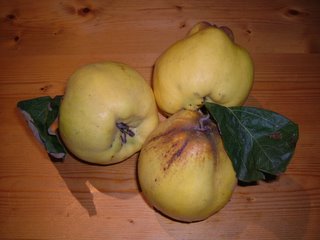 Both of these trees are self-fertile, so I only need one of each variety to make sure I get fruit like these quinces from my Mum’s garden (just as well, really; my garden’s not very big and I seem to have gone a little mad this year and given about 33% of the bedding space up to mass garlic production). Expect some glorious blossom pictures in the spring.

I’ll do my best to update as usual over the Christmas period, so keep an eye out for mulled wine, a home-made dill sauce for salmon, sausage rolls, and the enormous sirloin of beef I’m cooking on Christmas day. A very merry Christmas to all those of you who are swearing off using computers for the holiday period.

17 Replies to “Planting a medlar and a quince tree”