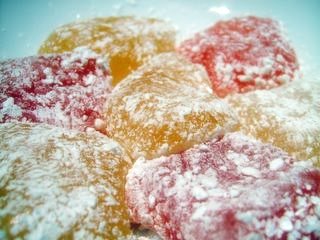 People keep asking me for a Turkish Delight recipe. Must be the creeping fingers of the Snow Queen; I am the only person I know who’s not been to see the Narnia film, and while I remain relatively unmoved by sweeties, everybody else is begging for chunks of fragrant goo.

CS Lewis was on to a good thing when he had the boy Edmund betray Narnia for little cubes of this scented, sticky sweetmeat. Lokum, or Turkish Delight, is undeniably delicious, and it’s a recipe with history. According to the story, five hundred years ago, Sultan Abdul Hamid called all his sweet-makers together, and ordered them each to make a new and delicious confectionary to keep the women in his harem quiet and happy. One came back with a tray of petal-soft, flower-scented Turkish delight, and the Sultan was so pleased with it that he immediately appointed the man as his Chief Confectioner, and served the sweet daily.

History does not relate whether the women became quiet. My guess is that whatever happened, they probably became quite plump.

The craze for things Turkish which spread around Europe in the 1770s and 1780s (just think about the entertainment at the time, like Mozart’s Die Entfürung aus dem Serail, with the executions and the gauzy Turkish ladies running around the seraglio pursued by manly Janissaries with curving swords and even more curving moustaches. You don’t need to be awfully perceptive to see why things Turkish had such appeal) made sweetmeats like this all the more popular, and Turkish Delight was swapped by courting couples and given as a fashionable gift. 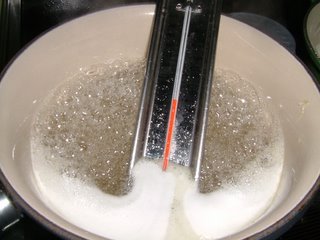 Unlike some quicker recipes, this old-fashioned recipe doesn’t use gelatine. Instead, the Turkish Delight is thickened with cornflour and caramelised sugar (and is suitable for vegetarians, if you’re feeling full of festive goodwill and wish to feed the poor afflicted things). Try this recipe rather than one with gelatine. It takes a bit longer, but the texture is more authentic and so much better than the texture you get with gelatine that it well justifies the extra fiddle. 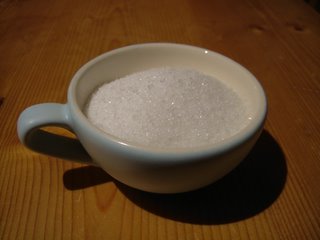 Begin by boiling the sugar with the lime juice and 1 1/2 cups of water. Use a jam thermometer and remove from the heat when the syrup reaches the soft ball stage (115C).

While you are boiling the sugar syrup, combine the cream of tartar and a cup of cornflour with three cups of cold water. (Using cold water should prevent lumps.) Mix well and bring up to a simmer, stirring all the time. Continue stirring at a simmer until the mixture has made a thick, gluey paste. Stir the sugar syrup into this paste. (If you end up with lumps at this stage, push everything into a saucepan through a sieve with the back of a ladle.)

Simmer the sugar and cornflour mixture, stirring every few minutes, until it’s a golden-honey colour and about 120C (this is halfway between soft and hard ball on your jam thermometer, and will take about an hour). Divide the mixture into two, and pour it into two prepared trays lined with oiled cling film (American readers – this is what we call Saran wrap over here). Add a tablespoon of rose water and a few drops of pink food colouring to one and stir, a tablespoon of orange-flower water to the other, and stir. Cover and chill for a few hours until set.

Turn out the wobbling sections. You will be glad for that oiled cling film. Slice the set Turkish Delight into cubes, and roll in a mixture of 1 cup icing sugar and 1/4 cup cornflour so that they don’t stick together. Set before the ravening hordes. If, unaccountably, they don’t raven their way through the whole lot in one go, store in airtight boxes between layers of greaseproof paper, well-dusted with the icing sugar/cornflour mixture.