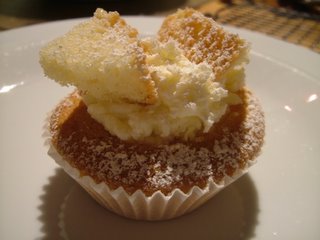 These little buttercream-filled fairy cakes were Mr Weasel’s favourite when he was a kid. He’s the baker in the house, and on getting home today he ran for the handmixer, claiming an attack of cake nostalgia.

He claims that being a computer scientist has given him an unparalleled skill for following instructions, and says this is why he’s so very good at baking. I think he was visited by a buxom, greasy-fingered fairy-godmother with cake crumbs in her hair, a wooden spoon for a wand and golden syrup down her apron when he was in his cradle, but who am I to say?

The cake batter which makes the body of these is the same batter we used for the pink cakes at last week’s party. You’ll need: 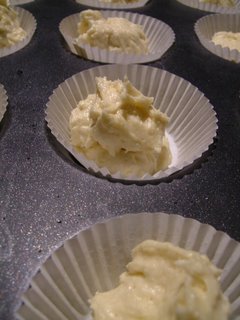 Beat the lot together with a handwhisk until pale and airy, divide between 18 cake cases and bake at 200°c for around 20 minutes, until golden. Use the Mr Weasel Aural Method to work out whether your cakes are done – listen to them when they come out of the oven (get close, but don’t burn your ear). If the cakes are hissing and popping, they’re not done. Put them back in for a few minutes and try again. 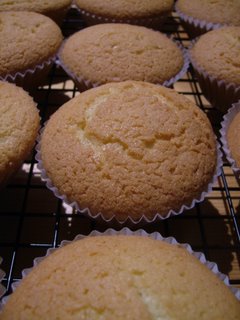 When the cakes are ready, remove them to a metal rack to cool.

While the little cakes are cooling, make a buttercream icing. You’ll need:

Buttercream icing
175g soft butter (use butter you’ve left out for a while, not the stuff with added vegetable oil in tubs)
350g icing sugar
A few drops vanilla essence

Chop the butter into little pieces, and place in a bowl with the icing sugar and two teaspoons of water. Beat the butter and icing sugar together with an electric whisk until well mixed and pale in colour. That’s it: piece of cake. (Hur hur.) 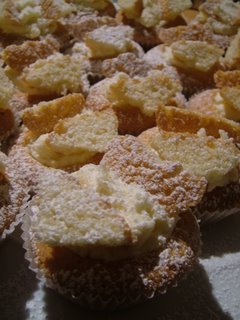 When the cakes are cool (important, this coolness; a warm cake may be crumbly, but a cool one will slice readily), slice off the top and cut it in half. Put a teaspoon of the icing on the cut cake surface, and put the half-slices of lid back on to look like little wings. Open mouth, insert cake and reminisce about children’s parties.