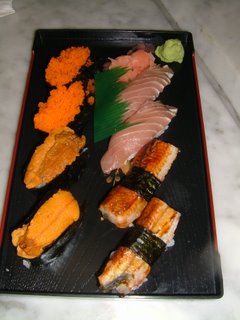 Fate smiled on me in the morning when my parents rang and asked whether we’d like to accompany them to Oriental City in Edgware (see this earlier post for address details and ways to get there). There’s a big, Oriental food court there, and while I usually gravitate towards the Malaysian or Vietnamese stalls, there’s also a stall called Japan Food which I hadn’t tried before.

A sushi chef, knife in hand, napkin on head, was looking busy. I went to ask him whether he had any uni, and he nodded, but made it clear he didn’t speak any English and pointed me at a lady in an apron, who took my order. So far so good. I asked for four kinds of nigiri sushi (nigiri is the kind of sushi which is made from a bullet of hand-shaped rice with a piece of raw or cooked fish, shellfish, omelette or other ingredients neatly placed on top). 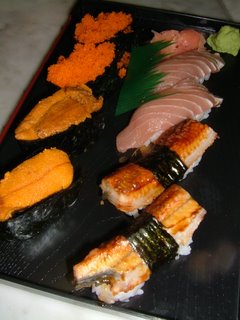 Tobiko (flying fish roe), are a crisp, tiny orange roe which are salted and sometimes flavoured before use. Uni is fresh sea urchin. Unagi is a cooked, fatty freshwater eel, grilled in a teriyaki sauce, and I think I am probably safe in assuming that you all know what tuna (maguro in Japanese) is.

They had everything I wanted, which was cheering. It took them twenty minutes to prepare the eight pieces of sushi. This is a bad sign; the chef was working slowly, which is unusual in a trained sushi chef. Worse still – as you can see from the photos, the sushi on the plate was . . . messy. Tobiko had spilled off the rice and out of its nori (seaweed) wrapping, and the unagi didn’t fit on its rice. This isn’t usual. The presentation of jewel-like sushi nigiri is important, and it’s a matter of pride for the chef. My chef was clearly not having a prideful day. 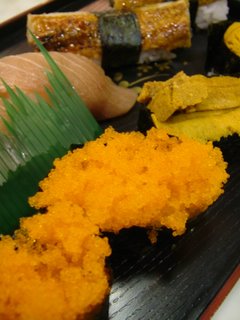 First, I took a tobiko nigiri. Not promising.This wasn’t a good example of the roe; it was oversalted and had a lot of gaspingly obvious extra flavouring. (Good tobiko is flavoured where it’s produced, but not with a sledgehammer and a shovel like this was.) The nori holding it on top of the rice hadn’t been toasted to make it tender to the tooth, and it rustled around in the mouth like a salty Mars Bar wrapper. 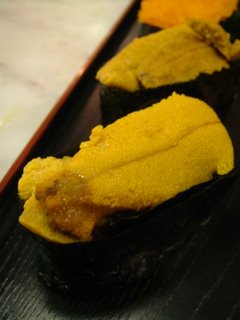 Fresh uni is very delicious stuff; if you like the taste of the sea you find in a raw oyster, you’ll love uni, which is firm but creamy, and tastes of sweet ozone and fresh seaside breezes. This was . . . fresh-ish. (I should have asked to see it before ordering.) Fresh uni is sweet, and it’s paler than this. Mine was still seaside-tasting, but a little bitter, and darker than it should have been. Chewy nori again. Disappointing. 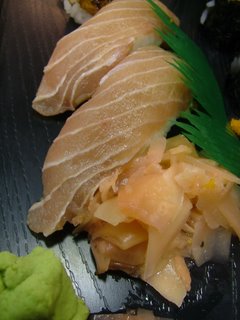 The tuna – blah. At least it was quite nice and fatty. It was pre-sliced (how long does it take a guy with a sharp knife to peel two rectangles off a slab of muscle to order?), and had been sitting around for a while, a bit damp. And a horror was lurking beneath it – the rice hadn’t been mixed with the sugar and vinegar mixture that flavours it properly, and I got a mouthful of vinegar. I was beginning to feel seriously miffed.

Good unagi is one of my favourite things in the world. It should have been grilled moments ago, its hot fat crisping the skin and making the flesh tender, painted with a sugary-salty sauce and conveyed straight to the waiting mouth. This crisping makes the skin friable and easy to bite through.

I’ll leave you to guess whether this was good unagi. You might benefit from some pointers: it was stone-cold. It was chewy. It was about as crisp as a well-sucked whelk.

All is not lost. Next month, I’ll be visiting (and blogging from) an extremely good sushi restaurant in California, which does better and fresher sushi than any I’ve tried in some of the very expensive Japanese restaurants in London. I’ve started planning holidays around the opportunity to go there. Watch this space.

(For all you ever needed to know about sushi and quite a lot more, visit this absolutely excellent sushi guide from Randy Johnson, a fish-obsessing American who used to live in Japan.)