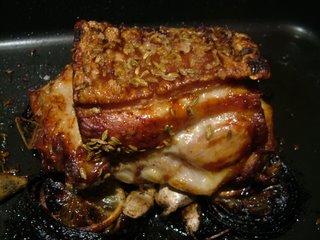 See this post for methods to get your pork crackling crisp and puffy.

I bought this belly pork from Sainsbury’s to see how successfully it would roast; I’m looking for belly pork to make Siu Yuk, a Chinese crispy belly pork with, and am roasting it in a European style until I find a successful joint which is fatty enough. This joint wasn’t fatty enough, but it made a rich and delicious supper roasted Italian-style with lemon, fennel and onions.

Update – about a year later, I did manage to track down some pork which was just right for Chinese crispy belly pork. You can see that recipe here.

The joint was really quite disturbingly lean and upsettingly tiny (this is what I get for supermarket shopping late at night in the middle of the week), but at least it was nice and dry. It’s not always easy to find belly pork on the bone in the first place; when roasted this only yielded about two tablespoons of fat. Amazing; this is where a pig stores its body fat, and I would expect to see nice, thick lines of white fat separating the layers of lean meat, with a soft layer beneath the skin to aid crackling. This pig had been working out (or had been bred for lean meat, but there’s a whole post on exactly what I think of modern farming methods waiting to be written one day when I’m in a bad mood). I had some lard in the fridge from a pork joint I cooked a while ago, and used that to annoint my anorexic pig-tum.

I’ve noticed fennel being used with pork in a lot of restaurants recently, and it’s a very good accompaniment. With lemon and onion it makes for a rich base of flavour. To serve two, you’ll need:

Prepare the pork skin for crackling, being very sure on this small joint to keep your scoring close. Rub the surface with salt, pepper and half of the fennel, and place the whole joint in a roasting tin on top of the sliced onion and lemon (skin still on), sprinkled with the rest of the fennel, and the whole cloves of garlic. Roast at 220°C for half an hour, then bring the temperature down to 150°C for twenty minutes. Rub the skin with the lard, and finish the joint under a hot grill for around five minutes, watching it carefully to stop the crackling from catching. 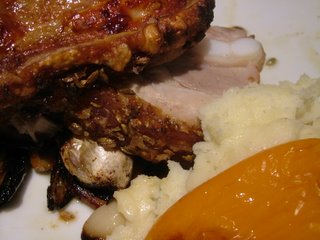 I served this with mashed potato and sweet red and yellow, pointed peppers which I grilled in a griddle-pan on the top of the oven, mixing the juice from the peppers with the pork’s pan juices to make a kind of gravy. Rich and delicious.