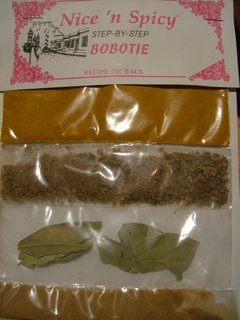 We were visiting some South African friends a few evenings ago, and were sent home, late and pleasantly hazy (at least on my part; Mr Weasel had to drive), with a packet of spices for making bobotie. This is serendipity; I’d already planned on making bobotie this weekend, as it had popped into my head the minute the same friends had invited us over. This bobotie, though, turned out even better than my old recipe, thanks in part to a slightly different method as described on the back of the spices, and also to the Cape Malay curry powder that was included in the pack of spices.

This curry powder is very different in character from the Bolst’s I usually use. It’s approximately Madras-hot, but it’s much heavier on the fenugreek than Indian curry powders often are. If any readers know where I can find some in the UK, I’d be delighted to hear from you. 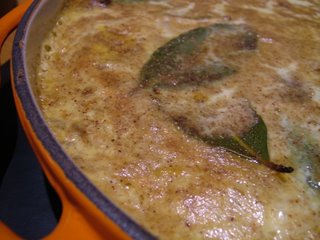 I first came across bobotie when I was a little girl. I remember asking Mummy what we were having for tea that evening. ‘Mince and custard,’ she replied. I wasn’t terribly happy about the concept, but it was, in fact, delicious. I would recommend that you don’t introduce the creamy topping on the spiced meat to your family as ‘custard’. Although it is, strictly speaking, a custard made with milk and eggs but no sugar, your squeamish children will not thank you for pointing this out. Call it a delicious creamy sauce or something.

Soak the bread in half the milk, then give it a good squeeze, retaining the excess milk. Crumble the bread and mix it with the beef and the curry powder. Leave to one side while you fry the onion so the flavour of the curry powder can penetrate the meat.

Melt the butter and use it to fry the onion, sliced finely, with the ginger, garlic, cumin and coriander until golden. Remove the onion and spices to a bowl, retaining the butter, and fry the meat, curry powder and bread mixture in the butter until the meat is cooked. Put in a bowl with the onion mixture, one egg, the lemon juice, salt, half of the remaining milk, the sultanas and the chutney. Mix thoroughly. 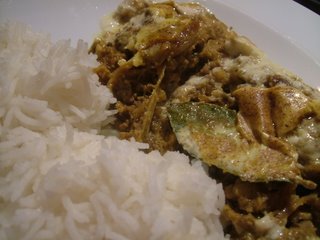 Press the mixture into a greased baking dish. Beat the remaining milk with an egg, and pour it over the top of the mixture. Press the bay leaves into the top (in South Africa you might use lemon leaves) then sprinkle with the Garam Masala. Bake at 180°C for 35 minutes, until the top is set and golden. Serve with rice and a salad.