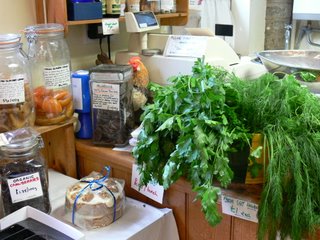 Burwash Manor Farm (New Road, Barton, 01223 263423), just outside Cambridge, is host to a rather special selection of shops. We’d dropped in to pick up some peg rails from Providence, a Shaker cabinet and interiors firm run by a couple from New England. I then swung by Nest to check out the salvaged 1950s kitchen equipment and refurbished typesetters’ cabinets, grabbed a quick cup of tea and a toasted teacake in the tearooms, and finished the shopping day in the Larder, a delicatessen whose owners have a real eye for quality products. 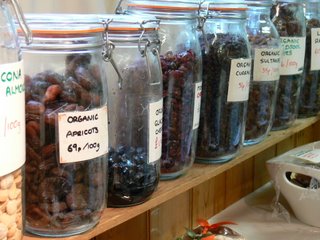 The Larder benefits enormously from being on a farm; on the day we visited, three people were outside the shop in the rain cleaning and preparing asparagus straight from the fields. Asparagus is popping up a few weeks later than usual this year, because it’s been so cold. Grab some now if you can; the season is very short. (No pics of the asparagus for you today – it was so good it deserves a post of its own.)

Everything on offer is organic, much of it from small suppliers. A lot of the fresh produce comes straight from the farm. This does mean that sometimes the product you’re after might not be in stock, so if you want the sourdough starter (which always sells very fast), the fresh eggs from the cheerful-looking hens, or happen to be after a particular type of vegetable or fruit, ring ahead to check on stock. (Alternatively, just do what I do: roll up and pick from the enormous selection on offer, letting availability dictate what you’ll have for dinner.) 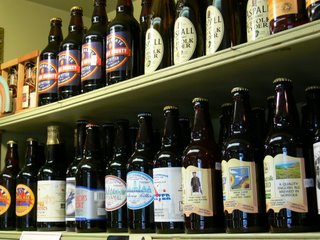 Local produce is strongly represented, with apples and juices from Coton orchard, just around the corner; wines from Chilford vinyard on the other side of Cambridge; local beers; and local pork pies and cheeses. Everything you might want from further afield is on offer, from organic Darjeeling tea to Ortiz tuna and soft chorizo for cooking. Loose produce is carefully labelled, so the buyer is aware of its source and its organic credentials. 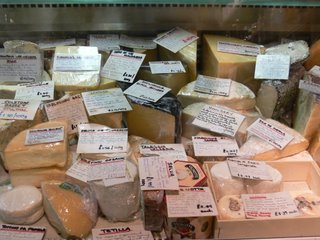 I’m in awe of the owners’ ability to pick suppliers. The balance of locally and exotically sourced produce is really well-measured, and the products are chosen with a flair for flavour and quality; Valhrona chocolate rubs shoulders with Cox’s apple juice, paella rice and marinaded mussels. And the cheeses – oh, the cheeses. I think this picture can probably more eloquently describe the fantastic sprawl on offer than I can. 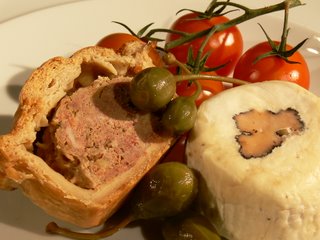 We bought a selection from the chilled cabinet for supper; some caperberries, some pork and apple chutney pies, and a little crottin of goat’s cheese with a piece of truffle pressed into the top, scenting the whole cheese. Some crusty bread and some tomatoes later, and we had an instant supper. Do visit if you get the opportunity; you’ll be unable to leave the shop with your hands empty.