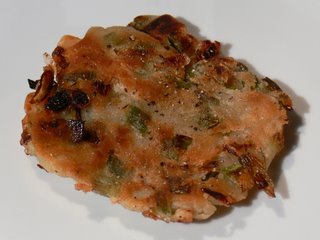 (That’s Chinese scallion pancakes for those of you cooking under the weight of a transatlantic language barrier.)

These flaky, crisp, aromatic little hotcakes are messy fun to make, and they were one of our favourites. Like puff pastry, they’re folded on themselves and rolled out several times, like a samurai sword (albeit one punctuated with onions), resulting in a glassy crisp surface and a softly flaking interior. My poor mother used to look on in horror at the mess; if you’re making these at home, I’d recommend using a glass or marble board (if you own one) to roll the dough rather than using the kitchen surface. They don’t take long, and they’re a delicious starter. 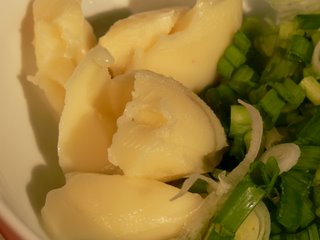 Combine the flour and water in a mixing bowl, and knead the mixture hard until you’ve got a smooth, soft dough. You’ll have to work the dough to make it smooth; keep kneading for a few
minutes. Leave the dough to rest for 15 minutes to allow the gluten to develop, helping the dough to become more stretchy.

When you set the dough aside to rest, you can use your spare 15 minutes to chop the spring onions finely and take the lard out of the fridge so it’s soft when you come to use it.

Divide the dough into six pieces. Roll a piece flat, into as thin a circle as you can manage, and spread one side generously with the softened fat.Add a drop of sesame oil, and sprinkle one chopped spring onion over the top. 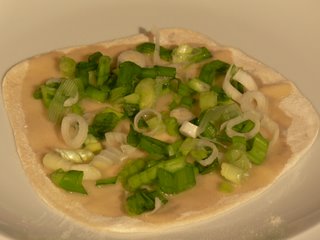 Roll the circle of dough up tightly like a scroll, with the onions inside. Use your hand to flatten the roll, fold it in half and use a rolling pin to make it into a flat circle again. You don’t need to flour your board; the fat from the dough will stop anything from sticking. Roll into a scroll again, then repeat the folding and flattening. You will have a pancake with many layers, each with a little fat between them. The edges won’t be very tidy; don’t worry. 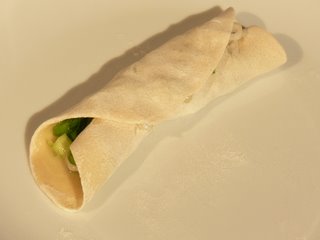 Repeat for each piece of dough. Season each pancake on both sides with salt and pepper. 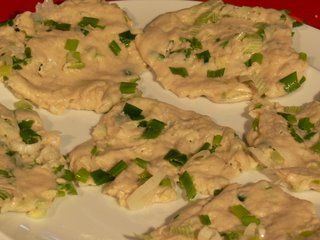 Melt a teaspoon of the remaining fat in a large, non-stick frying pan, and bring up to a high temperature. Slide the pancakes into the pan, and fry on one side for about 5 minutes until golden. Add another teaspoon of fat to the pan and flip the pancakes over using a spatula. Cook for 5 minutes more, until crisp and golden, and transfer to a serving dish. 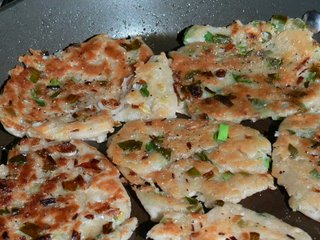 If you’ve got guests, you might want to use scissors to cut the pancakes into triangles. I didn’t; we just put them on our plates and gobbled.