Bar Shu (28 Frith St, W1D 5LF, 020 7287 6688) is a Sichuan restaurant on the borders of London’s Chinatown. Sichuan food isn’t much represented in London’s restaurants; most of the Chinese food you’ll find here is Cantonese, with chefs from Hong Kong and a very different cuisine from that you’ll find in other parts of China.

Although Sichuan food is rare in the UK, I’ve been to a few Sichuan restaurants in Malaysia, and was very excited to find one in London. The food is characterised by the heat of dried chillis and the sharp spicing of Sichuan peppercorns. I’d read several glowing reviews of Bar Shu, and decided that we’d go this weekend, after ticking another box on the ‘things to do before you die’ list and seeing the Bolshoi Ballet at Covent Garden. It was, as you can see, a grim, grim day for August; grey skies and torrential rain made me wish I’d brought a few jumpers. Nothing works better than eating a sack of chillis as big as your head to cure you of the weather-related blues.

The menu at Bar Shu can be a little hard to navigate; it’s structured around photographs of the food. All the starters on offer are cold, although smaller starter-sized portions of street foods including Dan-Dan noodles and dumplings in chilli oil are to be found at the back of the menu.

We started with Husband and Wife Offal, Smacked Cucumbers and the Numbing-tongue Dried Beef with Sichuan Peppercorns. The dish on the left is the glorious Husband and Wife Offal; it was made of feathery pieces of tripe and some other more muscly parts of the cow, all coated with a glossily red chilli oil scented with garlic, herbs and Sichuan peppercorns. Even my Mum, who doesn’t readily eat tripe, was fighting the rest of us for a piece.

This chilli oil is curious stuff. It’s startlingly red, but not blow-your-head-off hot. It had a gorgeous warm intensity, and penetrated the offal with flavour. 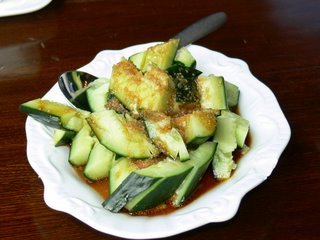 Smacked cucumbers (so-called because the cucumber is walloped with the flat of a cleaver to break it up a little and help it absorb the sauce) were delicious and simple. The cucumbers, raw, were annointed with a sweet garlic, sesame and soy concoction, and acted as a good foil for the heat of the other starter dishes. 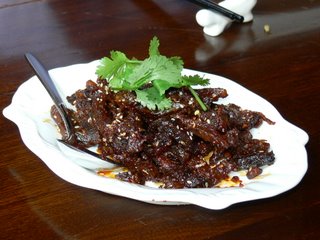 Numbing-tongue beef is one of the dishes that many of the newspaper reviews I read insisted you try. It’s a dried, chipped beef brisket which is marinaded in a chilli and Sichuan pepper mixture. The fragrant peppers come to the fore here, and cause a curious hot-cold numbing tingle in the mouth. If you’re not familiar with Sichuan peppercorns, you should order this dish, which showcases them beautifully. (If you are familiar with them, try the Husband and Wife Offal instead, which I have dreamed about in lurid detail every evening since Saturday.) 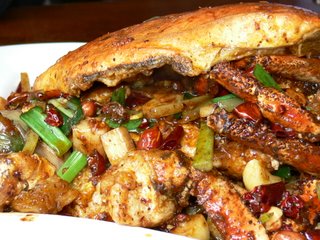 Fish dishes here are expensive, but we ordered a crab, which looked fantastic in the menu photograph. It was a lovely specimen, the shell packed tightly with creamy red roe, the legs full of clean white muscle. It was served in a dry style with more of that chilli oil, some whole garlic cloves, peanuts, spring onions, whole dried chillis, celery and bamboo shoots flown in from China. The spicing was positive and delicious; between four of us we sucked the carcass dry and licked the plates.

Pock-marked Old Woman’s Beancurd was delicious as far as my Dad and I were concerned. Dr Weasel and my Mum, the two people at the table with no Chinese genetic tastebud material, both found it a bit sour, which I think may have been to do with the preserved vegetable in the sauce. 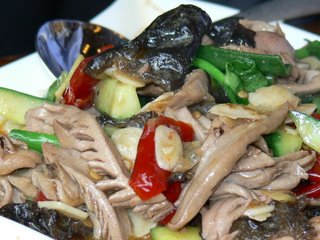 Offal was represented with flair on the menu. This dish is Flower-exploded Kidneys; kidneys sliced like the squid you’ve seen in Chinese restaurants so they form into a pretty shape when cooked, then stir-fried at a blisteringly high temperature for a very short time. It was perfectly done. The kidneys had been well cleaned and soaked, so they smelled sweet and fresh, and they’d been cooked so briefly that there was no hint of chewiness. Cloud-ear fungus and cucumbers provided contrasting textures. 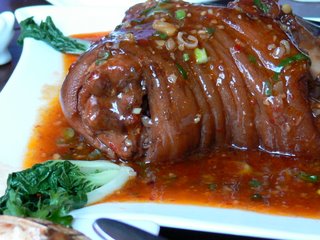 Pork knuckle, braised until the meat flakes softly away from the bone to the touch of your chopstick, was served in a thick, sweet sauce positively glowing with chillis. It was a mistake positioning this in front of my Dad, who perked right up when it arrived, and somehow absorbed the whole thing into his person in one go while I was looking the other way. 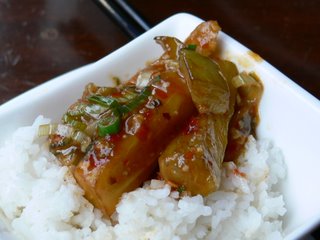 I responded by annexing the Fish-spiced Aubergines.

We were full to the gills and starting to run late, so on hearing that the sesame paste-filled glutinous rice balls for dessert would take half an hour to prepare, we decided to call it a day. I think that another visit is in order; there’s acres of menu left to explore. Those interested in exploring some Sichuan recipes should order Fuchsia Dunlop’s Sichuan Cookery. Dunlop is a consultant for Bar Shu, and the book is excellent – both book and restaurant come with a hearty recommendation.