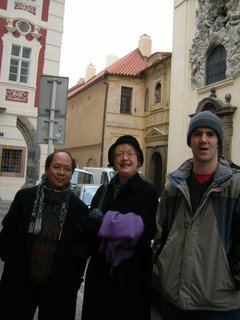 My Dad, like dads the world over, has a particular love for fatty foods from his childhood. (Here he is on the left of the picture, with my Mum and Dr Weasel.) He’s not allowed them very often, largely because Mummy has very sensible intimations of mortality when looking at chunks of lard. Of course, the fact that he grew up in rural China and Malaysia makes that bit harder to find the things he remembers fondly in the UK. These foods are things like sweetened olives; Kong Piang (a special kind of Foochow biscuit you can only find in two towns in Malaysia); good Bak Kwa (flattened, sweetened, spicy barbecued pork); real satay, cooked ourdoors over fanned charcoal with the bites of meat separated by tiny nuggets of pork fat; and a million things made out of the obnoxious parts of a pig.

Mummy, the family cholesterol-conscience, went to Bordeaux last week to visit my increasingly famous brother and to add to her own high-powered wine-tasting qualifications. I was concerned that Daddy, left on his own unsupervised, would just eat congee (rice porridge) all week straight from the rice cooker, so I cooked one of those childhood-in-paradise dishes and we drove it over as a surprise. This recipe is adapted from Mrs Leong Yee Soo’s The Best of Malaysian Cooking, my favourite Malaysian cookery book. The dish is a family must-eat whenever we visit Malaysia. 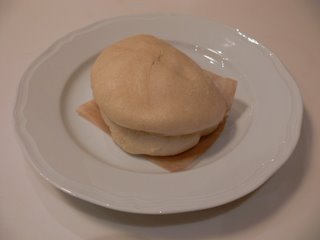 If you cook this, you don’t strictly need the steamed buns to accompany the meat; having said that, you’ll really be missing out if you don’t make them. This is the same dough you’ll find in char siu buns. It’s the perfect foil to the salty, aromatic pork, and the dough itself is just gorgeous to work with. It’s sugary, so the yeast works hard, and you’ll find it beautifully soft and puffy, like a baby’s cheek. The traditional technique will have you fold the oiled bun in half before steaming, so it opens when finished like a pristine sandwich bun for you to pack with meat and juices. To serve four with some left over for lunch, you’ll need: 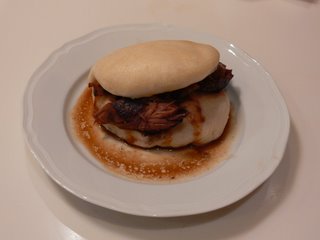 Start by rubbing the pork with a tablespoon of soya sauce, a teaspoon of the honey and the five spice powder, and set it aside to marinade for at least half an hour while you prepare the other pork ingredients. Place the garlic, shallots, half a piece of star anise and a tablespoon of sugar in the food processor, and whizz until they’re very finely blended. Heat the lard in a wok and fry the blended ingredients until they’ve turned golden.

Turn the heat down and add the pork to the pan along with any juices. Brown it all over, then add two tablespoons of dark soya sauce, two teaspoons of salt and three teaspoons of honey. Pour over half the water, and cook, covered for ten minutes. After ten minutes remove the lid and simmer gently until the sauce is thick and reduced.

Add the rest of the water, and bring to a brisk boil, stirring constantly to prevent sticking. Turn the heat down to a gentle simmer and cover again. Simmer, covered, for 2 hours until the meat is tender, turning the meat in the sauce occasionally. Add a little water if you feel the sauce is becoming dry.

Buns method
Mix the yeast, 1 teaspoon of sugar, two tablespoons of lukewarm water, half a tablespoon of salt and three tablespoons of vegetable oil in a teacup, and let it stand for five minutes.

Place the flour in a bowl and pour the yeast mixture into a depression in the centre of the flour. Add 8 tablespoons of castor sugar and 8 fl oz lukewarm water to the mixture and stir the flour with your hand until everything is brought together.

At this point the dough will be very sticky. Don’t worry – just knead for ten minutes or so, and it will turn smooth and glossy. Don’t add extra flour to get rid of the stickiness. The action of kneading will make the protein strands in the dough develop, and the stickiness will vanish on its own. You’ll know that your dough is ready when it has become smooth, and does not stick to the bowl. Cover the bowl with cling film and leave in a warm place until the dough has doubled in size.

Knock the dough back down and separate it into pieces the size of an egg. Roll each piece into a ball in your hands and flatten it with a rolling pin, then brush the top with oil and fold the bun in half. Place it on a square of greaseproof paper.

Arrange the folded buns on baking sheets, and cover with a dry teatowel. Leave in a warm place for 20 minutes, until they have risen again. Steam the buns for 7-10 minutes to cook. (You can steam the buns again to reheat.)