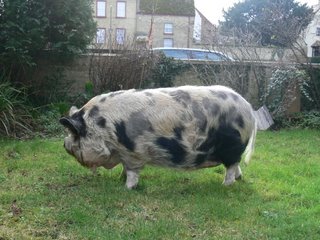 I don’t normally post non-food trivia, but this was much too good to not share – there is a pig in my garden. I have no idea where he came from, but messages have been left at all the farms in the village, so hopefully someone will pick him up soon.

He’s a very splendid, fat, hairy pig. I’m starting to think we should pignap and keep him, although it should be noted that Dr Weasel has started talking in dark tones about bacon.

***Pig update***
George the Pig (for this is his name – he is a Kune Kune pig) is safely installed in his field again. George is friends with a goat who managed to break through their fencing, and being a gregarious sort of pig decided to follow his goat friend; unfortunately, the goat skipped off into the distance leaving George, who has short legs and is rather fat, to wander into my garden and rootle around a bit until somebody noticed.

I was expecting George’s owner to come with some kind of pig harness, or perhaps a shepherd’s crook, but it transpired that all that was needed to get George to follow him home was a banana waved just out of reach of his snout. I hope he was allowed to eat it when they got back.

6 Replies to “There is a pig in my garden”