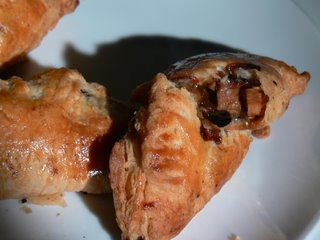 Here’s another dim sum recipe; in Cantonese this savoury pastry, a bit like a little pie, is called Char Siu Sau. It’s a parcel of crisp, flaky puff-pastry wrapped around succulent barbecued pork in a sweetly spicy sauce.

Char siu, the barbecued pork in question, has featured on this blog before, and is very easy to make – see the recipe here. The pastry I use to make these is a Malaysian-Chinese flaky pastry, made incredibly short and delicate with a lot of fat and some lemon juice. This is an altogether fatty recipe which is best made for a party (and believe me, if you serve them at a party they’ll vanish in no time at all).

To make about thirty little pastries (they freeze very well before the final baking stage, so you can assemble them and then freeze a few for a treat later on) you’ll need:

Begin by cooking the filling. Chop the two fillets of pork into small dice. Dice the onions finely and chop the garlic. Mix the vegetable oil and flour in a cup. Saute the garlic in the lard until it begins to give up its scent (about 2 minutes) and then add the onions, moving them around the pan until they turn translucent (another 2 minutes or so). Add the sugar, sauces, water and sesame oil to the pan, and bring up to a gentle simmer. Add the diced pork and stir until everything is well coated with the sauce. Add the oil and flour mixture, and stir until everything is thickened (about a minute).

Remove everything to a large bowl and chill in the fridge. (Your little pastry packets will be easier to fill with a thick, cold mixture.)

For really successful pastry, there are a few rules: keep the ingredients as cold as possible, rest the pastry for at least half an hour, and handle it as little as you can manage. To make the pastry, mix a beaten egg with the water, sugar and lemon juice, and chill until nicely cold. Rub the butter, straight from the fridge, into the flour until the mixture resembles breadcrumbs, then use a knife to chop the chilled lard into small dice, about the size of the top joint of a woman’s little finger. Stir the lard into the butter and flour mixture. Add the liquid ingredients to the bowl and use a knife or spatula (cooler than your hands) to bring everything together into a dough. Wrap with cling flim and rest in the fridge for at least half an hour. 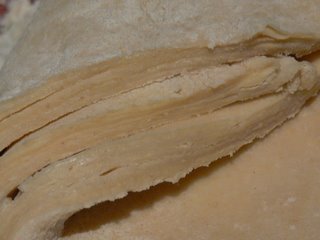 When you are ready to assemble the pastries, roll half the ball of dough out into a rectangle about half a centimetre thick, fold it into three (as if you were folding a piece of A4 paper to put in an envelope), turn it through 90 degrees so the long edge is facing you, and roll it out again. Fold, roll and turn another four times. You’ll end up with a slab of pastry which has been folded and rolled into many, many thin, flaky layers (you can see the layers in the raw pastry, already visible partway through rolling, here on the left).

Use pastry cutters to make circles, or a knife to make squares, and place a dollop of the cold char siu mixture in the centre of each. Use a beaten egg to seal the edges, crimp with a fork and make a little hole with your fork in the top side of each pastry (important, this – it will allow steam to escape and prevent your pastries from gaping open when they cook). Brush each one with some of that beaten egg, and put on a non-stick baking sheet in the oven for 10 minutes. When the 10 minutes are up, reduce the heat to 200° C and bake for a further 20 minutes. Cool the pastries a little before you eat – the insides will be unbelievably hot, as well as unbelievably delicious.