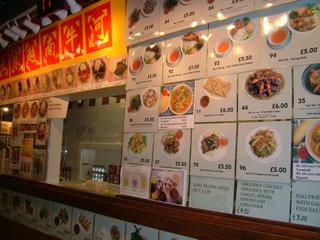 **Update – August 20, 2007**
I went to Oriental City at the weekend to see what was happening with the proposed closure (and to eat a big bowl of char kway teow). There’s some less bleak news at the moment – the various leaseholders at the property have managed to get an interlocutory injunction allowing the place to stay open pending a court case against the developers. There’s no set date for the court case yet – watch this space for more news.

I’ve written about Oriental City here a couple of times before. It’s a vibrant, loud, shopping and community centre in suburban north London, and is host to a number of south-east Asian shops including a wonderful supermarket and more sources of lucky porcelain cats than you can shake a chopstick at.

Oriental City’s biggest draw for me has always been its jaw-dropping foodcourt. About thirty kiosks grouped around a vast room of tables sell street food from all over Asia – you can eat Vietnamese, Korean, Malay, Tamil, Cantonese and Thai food, and accompany it with a large heap of sushi. Outside, they’re grilling satay and halving durians. The food is wonderfully authentic and inexpensive. I’ll happily drive the 60 miles to get there for a few hour’s kaffir lime-scented bliss.

As I’ve mentioned before, Oriental City is under threat from developers, who wish to turn it into luxury flats and a DIY store. This is a terrible shame – London is bristling with flats and DIY centres, but there’s nowhere else you can go to learn to lion dance, have an acupressure massage, buy a pack of ducks’ tongues and eat a big bowl of mee goreng all at the same time. Oriental City is a magnet for families like mine, and it’s an important cultural asset in this homogeneous and grey part of London. It’s somewhere where people from a number of communities can come and socialise, work, eat and shop.

The bulldozers are booked to roll in, and a trader I spoke to at the food court said they expect the place to close late this summer. The Chinese Embassy has raised the issue with the Mayor of London, people like Ian Wright (ex-footballer, chat show host) have been campaigning against the closure. Sadly, the Mayor chose not to give weight to the objections, and gave the go-ahead to redevelopment plans last month.

Redevelopment will disrupt and probably destroy 40 businesses, which employ 800 people. No provisions have been made by the developers to rehouse these businesses (as was their original suggestion) for the three years they plan to build for. The community facilities at Oriental City will also become defunct. And there won’t be anywhere to buy satay and durians any more.

There’s an online petition directed at Ruth Kelly, the Secretary of State for Communities, asking for a public inquiry into the closure of the centre. Please take a moment to sign it, and consider visiting Oriental City for the afternoon while you still can. It’s about 300m from Colindale tube station, just off the Edgware Road.

12 Replies to “Save Oriental City!”