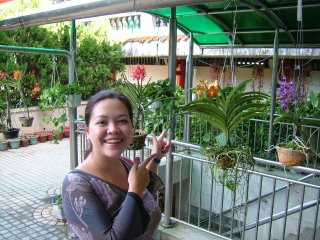 The Great She Elephant has tagged me with another meme, and it’s nothing to do with food. (This is an excellent thing; usually I have three or four recipes cooked, photographed and scribbled down in rough ready to blog, but being ill a couple of weeks ago and very busy last week has reduced the size of my…foodstack to only one recipe at the moment.) Given that this post is about me and not about dinner, here’s a rare photograph of me without any food. (There is potential that I am plotting to eat the orchids in the photograph later.)

GSE, who knows me very well, has asked me five probing questions. If you’d like me to ask you some similarly probing questions for you to answer on your own blog, please leave a comment. (Lorna over at Biographia Literaria actually emailed me to ask to take part while I was busy answering these – Lorna, I’ll let you know when your questions are ready!)

1) Who is your favourite/least favourite celebrity chef and why?
Favourite is easy – I don’t know whether Jeffrey Steingarten

counts as a chef, but he’s far and away my favourite food writer. Foodwise, I love Michael Mina (American celeb chef). I mourn the demise of Two Fat Ladies

Least favourite is also pretty easy. When I was eighteen, I won a food writing competition with Carlton TV, and got invited to the London Restaurant Awards as part of the prize. You can get a flavour of what a very long time ago this was from what I wrote about; those days, sushi on a conveyor belt was considered glamorous and exotic, and worth writing a long screed on. Bruce Willis was the guest of honour, having just opened Planet Hollywood. 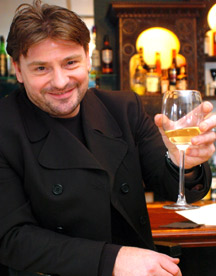 The awards ceremony was seething with celebrity chefs. Raymond Blanc kissed me on the lips. I discovered that although he was very short and smelled of garlic, I didn’t mind at all. Anthony Worral Thompson was surrounded by big blondes. Some woman from Eastenders didn’t eat anything, but sat in the toilets dabbing foundation on her face and sniffing all evening. Stephen Saunders (pictured on the right – now proprietor of a restaurant in Newmarket where I had a downright bad meal last year) was spectacularly and upsettingly sleazy, and won my personal Most Badly Behaved Chef award. Last year, I learned that as well as being responsible for serving me a godawful meal, Stephen Saunders is also responsible for these (not safe for work!) photographs, under his pseudonym Steve McQueen. Those at work and therefore not able to click are missing nude women balancing pumpkins on their arses, doing suggestive things to marrows, wearing parma ham hotpants and using their pudenda as fruitbowls. Stephen Saunders – you’re my least favourite celebrity chef.

2) Could you help me track down a recipe for Slovenian cheese roll pancake dumpling thingies?
Amazingly, yes. Many thanks to Moldova.org. You can find the recipe for sirovi štruklji here.

3) How many full bottles of fragrance do you have and which are your five favourites at present?
GSE and I both collect perfumes, although she is probably a little more rabid about her habit than I am, having dedicated space in her fridge for certain very special perfumes. There is dedicated space in my fridge for cheese and emergency chorizo.

I currently have 87 bottles not counting decants (although some of these are duplicate bottles of particular favourites which have been discontinued – I have five bottles of Guerlain’s Meteorites and two of Guerlinade, from before they’d announced the decision to keep selling it in the Paris boutique). My current five favourites (this took a lot of soul-searching) are: Guerlain’s Apres l’Ondee, The Different Company’s Bois d’Iris, Guerlain’s Mitsouko, L’Artisan Parfumeur’s Dzing!, and Diptique’s Philosykos.

4) Do you say No2ID and why?
Those who would give up essential Liberty, to purchase a little temporary Safety, deserve neither Liberty nor Safety. (There are so *many* things Benjamin Franklin says better than I do.)

ID cards are a dreadful idea. They won’t work for any of the purposes the government has rolled out (which include preventing illegal immigration and terrorism); identification doesn’t prove intent. They won’t prevent identity fraud – what better tool for the identity fraudster than a single database of all the people in the country? They won’t present a greater obstacle to people-smugglers than passports and visas already do. They turn the citizen/state relationship on its head (I should be able to ask a policeman for his papers – he should emphatically not be able to ask for mine). The cards themselves are the least of the problem – the giant database they’ll necessitate is a horrific idea.

Some people have very good reason for wanting to obfuscate their identity or location. These people include those on witness protection programmes, people escaping domestic abuse, asylum seekers being pursued by aggressive foreign governments, investigative journalists…the list is enormous. When a database is accessible by staff in banks, doctors’ surgeries, the police station, lawyers’ offices, Government agencies like the CSA, pharmacies and so forth, the sheer number of people using the thing increases the probability that one person whose intentions aren’t good and lawful will be able to access it.

Don’t get me started on the Government’s awful track record with IT projects, the fact that biometrics aren’t a proven technology, the costs or the compulsion aspect. The whole thing’s a fascist mess, and anyone with any imagination would be barking mad to vote Labour in the
next election. Please consider having a look at NO2ID’s website and signing up to their email newsletter. 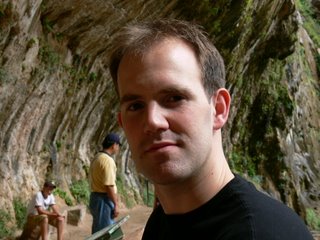 5) What is Dr Weasel’s best quality?
I’m a very lucky lady – I’ve got a fantastic husband who has a bundle of best qualities. Dr Weasel is intimidatingly smart, thoughtful, kind, honest, handsome and generous. He buys me flowers every week, does the washing up and the vacuuming and buys chocolate éclairs when I’m feeling sad. He’s incredibly hardworking, and takes his responsibilities at work, at the university (where he’s Director of Studies in Computer Science at a couple of colleges – told you he was intimidatingly smart) and at home very seriously. He’s as messy as I am, doesn’t object to my perfume habit, and tells me he loves me every day. I love him too.