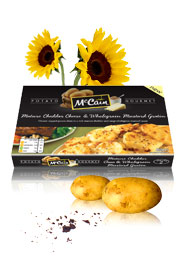 I was struck full of doubt and uncertainty when sent some vouchers by McCain, the frozen foods people. They wanted me to try their new McCain Gourmet range (I should point out that no money changed hands here, just a small envelope of vouchers), and I will admit that on receiving the first in what became a series of emails, I sat back at my desk and spent a couple of minutes scoffing loudly. After all – what comes to your mind when you think about McCain? Oven chips…OK, I buy oven chips now and then when I’m feeling lazy, and they’re pleasant, but not as good as the chips I make myself. Those grotesque smiley face reformed potato things that, alongside Turkey Twizzlers, formed the core of Jamie Oliver’s recent school dinners crusade are a McCain product. McCain also make those microwave pizzas, the potato croquettes I used to hide in my pockets rather than eat at school, and deep-fried mashed potato numerals for those who are using their supper to teach their children how to add. I marched to the supermarket, vouchers in hand, prepared to heartily dislike everything in the new range and ready to write something blistering after eating it.

But something curious has been happening to frozen foods in the UK recently. There’s much more emphasis in the ads we see on TV about the lack of preservatives and artificial ingredients in frozen products, especially since the fat-tongued one took on school dinners. Giles Coren, a food critic I like and respect, who takes food sourcing and sustainability very seriously, has been popping up advertising Birds Eye. This feels a bit like Sister Wendy advertising Ann Summers. His advertisements are all about freshness, quality and purity of ingredients, and responsible fishing and farming. McCain themselves have recently rolled out a new ad campaign (‘It’s all good‘), emphasising that they use small amounts of healthy fats, remove artificial additives wherever possible and use traffic light symbols to show how much fat, salt and other artery-clogging deliciousness is in each product. They’re also keen to point out that all the potatoes in their British products are British potatoes, so food miles are kept down.

The new McCain Gourmet range exemplifies the new approach. I was amazed on picking up a pack of Cheddar and Mustard Gratin from the freezer cabinet to read the ingredients list. The little metal dish contains potatoes; a mornay sauce made like I’d make it at home from whipping cream, butter, cheddar and wholegrain mustard; a sprinkling of cheese…and nothing else. What’s more, it tasted delicious and did not involve any interaction with my mandoline (a much loved but also much feared kitchen implement).

There followed a frenzied trawl through the whole range. My vouchers ran out after I’d tried the Potato Crumble with Four Cheeses (gorgeous Mascarpone, Danish blue, Cheddar and Grana Padano, topped with crisp breadcrumbs) and the Diced Potato with Leek and Parmesan, but by this point I’d been so thoroughly impressed that I bought the rest of the range as well. The Baby Potatoes with Roasted Tomatoes and Garlic are wonderfully, smokily garlicky; the Diced Potatoes with Tomatoes and Mixed Peppers were probably my least favourite of the lot, but I suspect this is because by this point I’d become addicted to creamy, cheesy sauces. You can buy your own to try at most UK supermarkets. The packs all weigh in at 400g and cost £1.89.

McCain, I’m sorry I imagined you were solely a purveyor of unspeakable fats and starches to schoolchildren. I eat humble (potato) pie. Keep producing stuff like this, and I’ll keep buying it. I’m lucky enough to enjoy cooking, so I don’t really mind spending an hour making a gratin from scratch, but when I can buy something this easy, this quick and this full of good, healthy, delicious things, I will occasionally consider spending that hour lying on my back in the garden with a glass of wine and feeling good about the world.