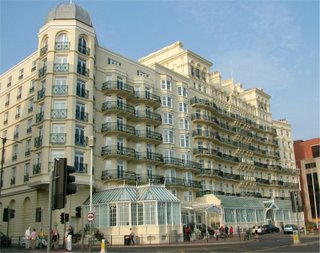 Here in the UK, we’ve just had a bank holiday weekend. True to form, the weather took the opportunity to stop being gloriously balmy, and did a very fine impression of somewhere north of the Arctic circa Noah. (I’m being perfectly serious here: the Met Office put out news yesterday informing us that this weekend, the UK was colder than Alaska.) Of course, this freezing, soaking weekend happened to be the weekend we had tickets for Cosi fan tutte at Glyndebourne, where I’d hoped to picnic in the garden; and a hotel room booked in Brighton, where I’d hoped to make use of the beach. Fat chance.

It’s usually pretty difficult to find a hotel room within reach of Glyndebourne during the opera festival, and many local hotels insist that you take a room for at least two days if you’re there over the weekend. I managed to find a breathtakingly expensive room for a single night at the De Vere Grand in Brighton, ten miles from Glyndebourne, which boasts five stars and an interesting history (it’s the hotel which was bombed by the IRA during the 1984 Conservative conference, and it’s opposite the burned-out remains of the West Pier). 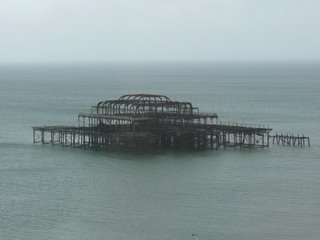 £210 will find you a large room in the front of the hotel, with a big picture window looking over the English Channel and the curiously beautiful ruins of the West Pier. £210 is a large sum to be paying for a non-suite room (that’s about $420 for American readers), and I expect something pretty fine for the money, especially in a hotel boasting five stars. I’m still bewildered by the curate’s egg of an experience we had in our 24 hours at the hotel, where the staff were, on the whole, charming, helpful and solicitous; the room seriously sub-standard; and the check in/out experience a total nightmare.

First, the good. On arriving at the hotel, having carried Dr Weasel’s dinner jacket from the car in a torrential downpour, I was greeted by the concierge who took it from me, and told me he’d dry it and have it delivered to the room. He not only dried it (all without asking); he also removed all the cat hairs. 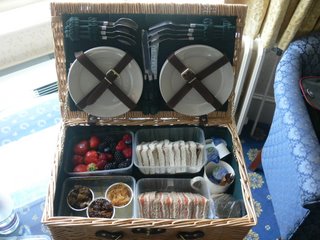 More good: I’d ordered a picnic to be picked up when we arrived, so we could take it to the opera (where it’s traditional to spread out on the lawn outside the auditorium in the long interval over champagne, sandwiches, strawberries and cream). The hotel offers a picnic service at around £20 a head, depending on the contents of the hamper. The gentleman I spoke to was charming, and I asked him to surprise us with the picnic contents. I was more than surprised; I was delighted. He’d packed the basket, which came with proper porcelain and cutlery, napkins and a rug, with beautiful roast beef and horseradish cream sandwiches on white bread, and some smoked salmon and cream cheese on brown, all with the crusts neatly sliced off. There were four excellent cheeses, including a wonderfully nutty Comte, all accompanied by some home-made relishes, including a tangy, sweet onion marmalade, and a relish with allspice and fresh apples. A selection of different grapes and celery, along with some lovely little biscuits, accompanied the cheeses. There was a dish of soft fruits: giant blackberries, sweet raspberries, strawberries and blueberries. And most welcome of all, because it was very, very cold at the covered picnic table where we huddled over our hamper, was a huge thermos of fresh coffee, complete with proper china mugs.

More good: breakfast was in the best tradition of the English hotel breakfast. The buffet spread was vast, and offered Continental and English breakfasts, with lovely little black puddings, delicious rosti, a fresh egg station and extremely moreish muffins, all with a view of the sea. The serving staff were some of the most cheerful people I’ve ever met at eight in the morning. Evening cocktails were also good (they’ll be better when the smoking ban comes into force), with some deliciously strong martinis; and it was great to sit in the conservatory at the front of the building and watch the thunder and lightning over the sea. Our wake-up call was on time, and the correct newspapers were delivered.

Unfortunately, I’m struggling to find anything else good to say about the place. Check-in was late, but not insultingly so. This isn’t something I’d recognise as a five-star hotel, and I do not expect a room I’ve forked out £210 on to have fraying carpets, chipped tiles (they’d made an effort at disguising this with something that appeared to be typewriter correction fluid), someone else’s shortest, curliest hairs adorning the bathroom, upholstery that’s coming apart at the seams, a television that doesn’t work and Britain’s least comfortable bed. This king-sized plank was actually two planks pushed together with a solid ridge standing proud all the way down the centre, like a Berlin wall between husband and wife. My side had some plasticky, sweat-inducing layer under the bottom sheet, and I woke up glued moistly to the bed down the side where my skin met the mattress. Dr Weasel leapt from bed screaming every time a police car howled past the building, sirens on. It seems there are more events requiring sirens and lights at 3am in Brighton than is, perhaps, natural, and the glazing in this place is very noise-transparent. The radiators were a) fierce, b) unadjustable and c) very emphatically on, so the hotel had accompanied them with an air conditioning unit which, also very emphatically on, whined into the night like a conference of wasps.

That excellent breakfast went a long way to soothe my troubled nerves, and we went to check out with a smile. That smile evaporated when we checked the bill and found a number of cocktails on it which appeared to have been ordered and signed to our room the previous afternoon, while we were ten miles away, soaking up some culture. We explained that this was obviously a mistake, given that we weren’t even in the building…and this is where things went badly wrong.

In any other hotel I’ve stayed in, politely notifying reception of erroneous charges is almost always met with an apology and the erasure of those charges from the final bill. This time, though, the receptionist decided to respond with a cynically raised eyebrow, and she told us that there was no mistake: we had definitely ordered these drinks.

I feel a prat quibbling over a sum that’s under £20, but this place had already seen a great deal of our money for a sub-par night, and I found this insistence that we were lying about the drinks massively insulting. On seeing the specifics of the bill, I felt even more insulted – the people who’d signed the drinks to our room had been drinking Shirley Temples.

Several minutes of arguing later, the receptionist took the charge off the bill, announcing righteously that she would be going to the bar later to check the signature on the drinks charge against her record of our own signatures, and charging our card if she found they matched.
We stomped out, glowering, and started to drive towards Cambridge, smug in the knowledge that we do not drink Shirley Temples. Ten minutes later, I received a mildly sheepish, mildly apologetic phone call informing me that ‘someone had made a mistake’, and that we wouldn’t be charged for the drinks after all. 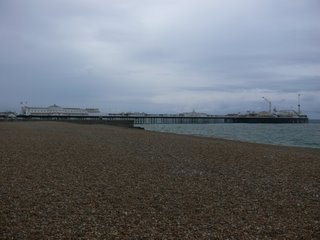 So sorry, De Vere Grand – I’m not coming back any time soon. Put some money into refurbishing the rooms, train your receptionists and cleaners as well as you have trained the excellent catering and concierge staff, and perhaps I’ll think about it in a few years’ time, when I’ve stopped being piqued about the drinks thing…but for the meantime, I’ll be going to the Hotel du Vin around the corner.