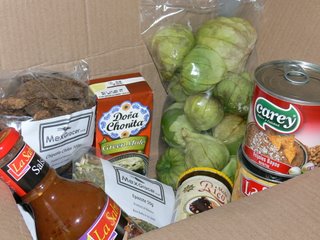 Those of you who read this blog regularly might remember that about a year ago, I mentioned in passing that I couldn’t find any tomatillos in the UK. There were a few Mexican ideas I wanted to try out with some of the little green beasties, but besides growing my own, it looked as if there was no way I’d be able to find any.

Eventually, I gave up on tomatillos. Then, about two weeks ago, I had an email from Sol, half of the husband and wife team that runs Mexgrocer.co.uk. After we’d chatted for a bit, Sol sent me a lovely box of Mexican ingredients to play with, and nestling at the top of the box, I found a bag full of beautiful fresh, ripe tomatillos, wrapped up in their papery husks. Other things in that box went to make a big meal for a group of friends (you’ll read more about that meal later on this week). Sol and his Mexican wife have made sure that you will be able to find ingredients which have been unavailable in the UK for years. There are chocolatey moles (a thick, savoury sauce which I used to smother some sticky sauteed chicken pieces), tamales, nopales (prickly pear cactus – a very delicious vegetable), a breathtaking selection of fresh, dried, smoked and bottled chillies, and some herbs and spices I’ve never seen on this side of the Atlantic. 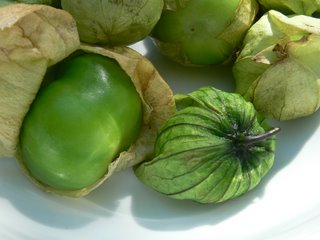 So then, you ask. What are these tomatillo things? It’s probably simplest if I explain what they aren’t. They’re not cape gooseberries, even though they have a papery, Chinese-lantern-type husk protecting the fruit (cape gooseberries and tomatillos both come from the physalis family). They’re not unripe tomatoes, even though a tomatillo without a husk looks precisely like a green tomato. They have a fresh, lightly acidic, juicy taste, lots of tiny seeds, and are firm and gloriously green when ripe. They feature very heavily in green sauces in Mexican cooking, and if you’ve not tried them before, you’re in for a treat. 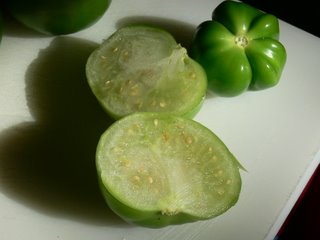 Tomatillos keep very well in their husks – pop them in the fridge and they’ll last for a couple of weeks. You can also freeze them successfully if you’re going to be using them in a sauce.

An uncooked, emerald-coloured salsa is the ideal way to show these little fruits off. This salsa couldn’t be easier to prepare, and it’s fantastic with rich foods, its fresh zing cutting through fatty, creamy sauces. To make salsa verde for six, you’ll need: 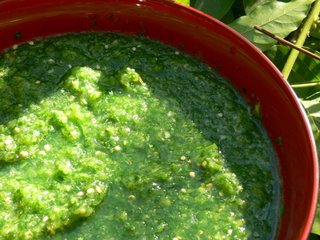 Remove the husks from the tomatillos and wash them to remove their natural sticky coating. Halve them, removing the woody bit where the stem met the fruit. Remove the seeds from the chillies, and wash the spring onions and coriander carefully to remove any grit.

Put all the ingredients in the food processor, and whizz until you have a slightly chunky mixture. Chill before serving. This salsa is great used as a dip, and it’s also delicious as a topping for rice, or as an ingredient to lift the flavour of a lovely meaty taco.