Carnitas are one of my favourite Mexican dishes. This is a luscious way with pork, which brings out a deep flavour from the meat and gives it a superbly silky texture. Unfortunately, I can predict as I type this that some of you are going to balk once you’ve read the recipe – because all this deliciousness comes about because the meat is poached in nearly its own weight in pork fat, then drained. I know that the word ‘lard’ is about as popular as the word ‘anthrax’ in recipes these days. It’s a great, great shame – there is joy in good foods, and some of the very best are thick and unctuous with glossy animal fats.

We appear to have developed a terrible national neurosis about fat in general, and animal fats in particular. In moderation (after all, you’re probably not going to be eating carnitas more than a couple of times a year at the most), fat is just part of a balanced diet. It provides a vehicle for vitamins A, D, E and K, which are only made available to your body when dissolved in fat. Fat maximises flavour, creates exceptional textures (think of a lardy puff-pastry, a potato cooked in goose fat, a crisp slice of bacon), and, quite simply, fat can make you happy, which is as positive an outcome as I can imagine. Fat is, undoubtedly, fattening…but I encourage you to take a trip to the supermarket and look at the average size of the glum people stuffing their trolleys with low-fat spreads and low-fat ready meals. Worst of all, there have been reports recently that parents have been so worried by the dire messages we’re all getting about fat that they are feeding their children a diet unnaturally low in fats, resulting in deficiencies in those fat-soluble vitamins and, surprisingly, obesity later in life. If you’re worried about your cholesterol level, the best advice I can offer is to follow your carnitas up with a bowl of porridge for pudding.

So here is an unapologetically fatty recipe. Please cook it and enjoy it rather than worrying about it. To serve six, you’ll need:

1 kg lean pork, cut into 2-inch cubes
750g lard (this is best purchased from your butcher if he cooks on the premises – otherwise, a block from the supermarket will be fine)
1 onion
1 handful coriander
2 green chillies
Sour cream or crème fraîche, salsa and tortillas to serve.

Make sure the pork is well trimmed of fat. I bought a whole, boned leg joint and diced it myself, removing the skin – this can sometimes be cheaper than buying ready-diced pork. Put the pork in a large bowl and season it generously (use a little more salt than you think you will need) with salt and pepper.

Melt the lard over a medium flame in a large, heavy-bottomed pan. Tip the pork into the lard and simmer for between 1 hour 15 minutes to 1 hour 30 minutes. When the pork is ready it will just be beginning to brown, and it will be soft to the fork. Use a slotted spoon to remove the pork from the lard, and put it in a baking dish. Preheat the oven to 200° C (400° F). 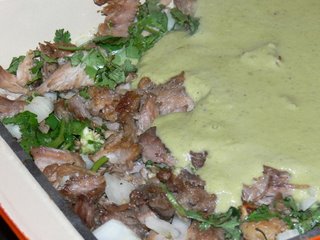 Use two forks to shred the meat well. Chop the onion into small dice, and slice the chillies. Chop the coriander finely. Mix the onion, chillies and coriander with the meat in the dish, then cover the whole lot tightly with tin foil.

Bake the dish for 15 minutes. The carnitas will be warmed through – the onion, not completely cooked, will be sweet, but will still retain its crunch. I poured some heated mole verde from Sol at Mexgrocer over the dish, but this isn’t necessary – I just felt like some delicious Mexican overkill.

Serve your carnitas with some salsas, soured cream and tortillas, (and watch this space for a pathetically easy guacamole). Summer might have finished, but if you eat like this you can almost convince yourself that your dining table is temporarily in Mexico.