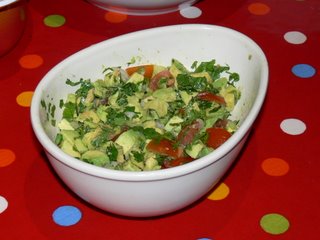 I am almost ashamed to be calling this a recipe, given that it’ll take you about three minutes to make. All the same, it’s very tasty, and it’s a great partner to the other Mexican recipes I’ve been making this week.

I have an interesting piece of avocado trivia for you today: the word guacamole comes from the Nahuatl word ahuacamolli – literally ahuacatl mole, or sauce. Ahuacatl is the Nahuatl language word for avocado…and it also means ‘testicle’. Be gentle as you chop your avocados.

Some people assert that tomatoes have no place in guacamole. I think it’s much, much nicer with tomatoes, which offer sweetness and a little acid to the mixture – if you use tomatoes, you can get away with a little less lime. Experiment at home and see what you think.

Cut the tomatoes into eighths, and cut the onion into small dice. Chop the coriander finely. Remove the seeds and ribs from inside the chillies and dice their flesh finely. Finally, chop the flesh of the avocados roughly and mix vigorously with the other chopped ingredients, squashing things around a bit in the bowl. Squeeze over lime juice to taste and season with salt and pepper.