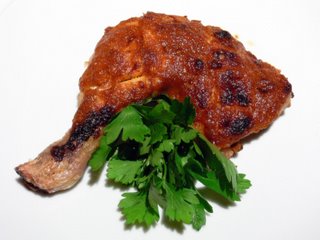 Devilling is a Victorian technique for resurrecting drab leftovers. It involves making a spicy paste from mustard, Indian chutney and other storecupboard standards, dressing cold, roast meats with the paste, then grilling until the whole confection is hot. The Victorians were wont to devil anything they could get their hands on; breakfast kidneys were devilled, eggs, hams, mutton chops: let’s be honest here. It was really a way to disguise food which was a bit elderly and didn’t taste that great any more.

In North and South, Elizabeth Gaskell describes some devilled chicken which “tasted like saw-dust”. The cook must have been low on mustard that day. Disraeli’s curiously awful Sybill describes the requirement for a cool glass of water with spicy devilled biscuits (I am still not quite clear on how precisely you’re meant to devil a biscuit – he probably meant that the biscuits were heavy on the chillies). These days, we don’t really use this technique much any more, although I do remember a home economics class at school which culminated with a slightly boingy hard-boiled egg piped full of a gritty orange yolk, mayonnaise and raw spice mixture. Unsurprisingly, I haven’t devilled anything since.

Never say never. Having mentally consigned devilled-anything to the ‘unlikely to be delicious’ pile, I found myself browsing through some of my antique recipe books at the weekend (a very cheap obsession, should you get bitten by the collecting bug; they’re usually available for pennies in bric a brac shops and they’re fascinating; who knew that powdered millipedes were good in a sort of soup for hysteria?) and read through a devilled chicken recipe. It actually sounded pretty good. I looked up another one. It sounded fantastic. Time to swallow my prejudice and get devilling. All the same, I decided to roast the chicken specifically for the dish rather than using leftovers. It was amazingly and unreservedly good, and it’s going to become a regular on our supper table. To devil my four chicken leg and thigh joints (these are almost always the bits left over when you have a roast) I made sure that unlike Mrs Gaskell, I didn’t skimp on the mustard, and that like Disraeli, I had a cold glass of water standing by. You’ll need:

If your chicken is raw, put it in a roasting tin and roast, drizzled with plenty of salt, pepper and olive oil, at 180° C (350° F) for 40 minutes until crisp and golden, and set aside in the roasting tin to cool. If you’re using pre-cooked chicken, just place it in the cold roasting tin and start cooking the sauce.

Melt the butter in a small saucepan and stir in the mustard, chutney, chilli sauce and Worcestershire sauce until you have a thick paste. Remove from the heat. Cut deep diagonal gashes into the meat of the chicken, with another set of gashes across them. Push the paste into the slits in the meat, and spread it generously all over the skin of the chicken. If there’s any paste left, put a dollop under each chicken joint.

Place the roasting tin under the grill about 4 inches from the flame, and grill for 10 minutes until the paste is starting to brown and the meat is hot. André Simon suggests dredging the chicken pieces with flour after you’ve smeared them with the paste in order to achieve a crispy finish. You might want to try this if you’re using yesterday’s chicken, but chicken you’ve just cooked should have a lovely crisp skin underneath the paste, so extra crispiness isn’t really necessary.

Serve with buttered rice or new potatoes and a sharply dressed salad.