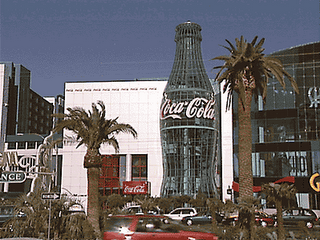 …because seriously, most of you are drinking total garbage. I spent half an hour today subjecting my digestive system to a foaming, fructose-laden onslaught of bubbles, colourants and aromatic aldehydes, all in the name of helping you, dear reader, avoid some of the worst the world has to offer in sodas and mixers. I am now nearing diabetic coma and peeing for all I am worth.

Those of you who have driven down the Las Vegas Strip before can’t have failed to notice the hundred-foot Coca Cola bottle nestling (for Vegas) unobtrusively next to the squatting green mega-casino that is MGM Grand. The giant bottle houses a discount show tickets booth and Everything Coca Cola. This is a place (optimistically referred to as a ‘museum’) mostly devoted to Coca Cola merchandise – if it is your dearest wish to be clothed from head to foot in Coke-branded nylon and festooned with Coke pins and magnets, Everything Coca Cola will be right up your alley. Up on the first floor, there’s a bar where you can order the obvious in something called a Collectible Heritage Bottle and sip it through a straw while watching Japanese tourists take photos of one another in the arms of a fibreglass polar bear. The bar also offers one of America’s strangest tasting menus – a selection of 16 ‘International Flavors’. These are drinks produced by the Coca Cola company and sold in places far away. The sort of places where you should be very, very careful when ordering something wet to go with your meal.

We started with Lilt, from the UK. I’m familiar with this stuff; my Grandma used to keep a fridge-full of it, and it’s sweet, but not bad – an orange-tinged soda which tastes approximately of grapefruit and pineapple. Kin Cider from Ireland was also inoffensive. It’s essentially what we Brits call lemonade; a clear, fizzy, lemon-flavoured drink; Kinley Lemon from Israel was another lemonade, this time slightly cloudy and sharpy citric. South African Stoney Ginger Beer was also cloudy, with a pleasantly gingery kick – very different from Krest Gingerale from Israel, which was a lavatorial colour, packed no heat and ached with blandness. Mezzo Mix is German, and appears to be a mildly spiced sort of cross between a cola and a lemonade. I’d actually consider buying this to cook a ham in; it was less sweet than Coke and had a really good balance of spices. And Fanta Blackcurrant from Hong Kong is really very good indeed; it’s flat, and not too sweet, like a very dilute glass of Ribena (a British blackcurrant cordial which most of us toted around in flasks at school).

Things started to go wrong with the eldritch green Fanta Melon, also from Israel. I don’t know what the Israelis are doing to their melons, but they should stop immediately. VegitaBeta from Japan was flat, orange, and tasted of ghastly mystery. China’s Smart Apple was a glass of apple-smelling nuclear waste; Smart Watermelon was bright orange and very similar to something I had washed my hands with at Circus Circus the day before while reminiscing about Fear and Loathing in Las Vegas. Unprompted, I do not think I would have applied the word ‘smart’ to either drink, but clearly Coca Cola’s marketing people know better.

Passionfruit from Argentina was lurid but actually pretty tasty, and reflected its name (amazing, this, given how little some of the other drinks resembled their suggested ingredients). Mexico’s Lift Apple was the colour of nicely oxidised apple juice, and was delightfully unassuming when compared to the Smart Apple, which I can still taste somewhere deep in my digestive tract. Central America started to get seriously weird with Costa Rica’s Fanta Kolita. I was under the impression (thanks to a bleary night with Wikipedia trying to work out what on earth Hotel California is about) that a colita was the flowering head of a cannabis plant, but the orange stuff in the glass appeared to be much less exotic – a Latin version of Scotland’s truly awful Irn Bru, which is advertised in the UK, with good reason, as being made out of girders. Simba Guarana from Paraguay was also downright alarming: a heavy sarsparilla fizz the colour of weak tea.

All this pales into an insignificant froth when compared to the quinine-laced horror which, according to the Coca Cola-clad barstaff, Italians drink voluntarily. I would be unsurprised if they’re using this stuff in Guantanamo Bay to force confessions. Beverly looks totally innocuous. It’s clear and fizzy, like an alluring glass of Perrier water. It tastes of death. Sugary, but chemotherapy-bitter death, a bit like chewing on the icing-frosted pith of a pomelo from hell. I checked with the staff that our drink had not been swapped out for poison by a humourist in the kitchen. They shook their heads sagely and said that sophisticated Romans drink Beverly as a delicious aperitif, presumably to set themselves up for an evening’s pizza, romance and street-fighting.

Today I discovered that the world has still not learned to sing in perfect harmony. Some of us like our drinks overpoweringly sweet. Others like them flat. Others still like violent fizz and medicinal flavours. But the Italians – they’re dangerous. Stay away from them and their death-drinks, because if they’re habitually drinking something as revolting as Beverly they are either crazed or plotting something brilliant and totally, totally evil.