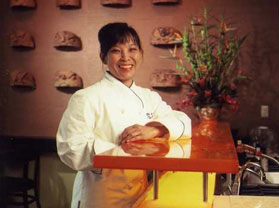 Update, Jan 2009 – I’ve just been back to Typhoon, one year after I wrote the post below. It’s still just as good as it was last year – if not better – and the changes that have appeared on the menu since I was last here are fabulous. Try the lemongrass barbecued chicken if you get a chance, and tell them I sent you!

Remember Lotus of Siam in Las Vegas? Gourmet Magazine had heaped hyperbolic praise on it, and called it the USA’s best Thai restaurant. We had a good, but not shockingly good meal there in December, but I left unconvinced that the continent lacked any Thai places better than this. What do you know – it’s barely two months later, and I’ve found somewhere that beats it hollow.

We visited Typhoon‘s glossy, vampy Broadway branch at the Lucia hotel in Portland (tel. 503 224 8285). The Lucia is a very stylish boutique joint – all modern murals on the toilet doors, architectural flower arrangements, frosted glass, leather, lacquer and velvet. Typhoon’s styling sits well here, and the restaurant was busy both nights we visited (be sure to book).

Service is tight and charming. We’d asked for a booth when booking our first meal at Typhoon, but arrived to find that the booth that had been earmarked for us was still full (writhingly so) of a couple who were maybe enjoying their meal a little too much. No problem for the hostess – she put us at what she and the waitress referred to as ‘the Mafia table’, a great big booth meant to seat about six, on a platform commanding one end of the restaurant, with a great people-watching view. Thoughtfully, both places were set so that we were next to each other on the side of the giant table with the view. 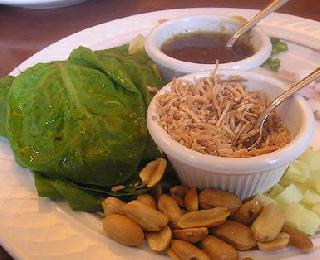 If it’s your first visit, it’s absolutely essential that you choose something interesting from the extensive tea list (there’s a link to a pdf of the full list at the bottom of the linked page) and that you order the Miang Kum for your starter. It’s the house special, and a rare dish that I’ve not found in any other Thai restaurant. Miang Kum is a peasant-style dish consisting of freshly roast peanuts (not a hint of bitterness here – the peanuts had been roasted that evening); tiny preserved shrimp; little cubes of ginger; slivers of bird’s eye chilli; miniature dice of lime, flesh, skin and all; shallot pieces; and freshly toasted, shredded coconut. You take a pinch of each ingredient and wrap it in a fresh spinach leaf, daubed with some of chef Bo Kline’s sweet signature sauce, and pop the little parcel in your mouth. An astonishing burst of flavours results – bitter, sweet, salty, sour, and deeply savoury all at once. I roared through the shrimp rather faster than the other ingredients, but our attentive waitress went straight to the kitchen to find some more – and when we came back later in the week and ordered the Miang Kum again, she recognised us and brought out an extra bowl of the shrimp. There’s service.

This dish sets the quality for the rest of the meal. Ingredients are fresh and bright, and sourcing is impeccable – the prawns at Typhoon are wild, not farmed, and only cuts like tenderloin and sirloin are served. “How,” asked Dr W, “are they making things taste this much without MSG?” I can only guess that there was magic in the fish sauce.

Almost everything we ate on both visits was a standout. Papaya salad was clean, fresh and full of zip. The house fried rice arrived looking unexceptional – but once in the mouth was nearly good enough to make me give up cooking. Pineapple rice, full of curry spices and the fresh fruit, could have made a generous meal on its own. Eggplant Lover made the most of this vegetable’s ability to soak up flavours (black bean in this case) and of its gorgeously velvety texture, contrasting beautifully with chunks of tofu. The larb, lip-numbingly hot, was much better than the Lotus of Siam version. Dr W ordered half a five-spice roast duck with buns from a specials list and hasn’t stopped talking about it since. The beef with grapes was inspired. And neither meal left us with room for pudding.

Sometimes I look around myself in Cambridge and wonder what the hell we’re doing. Perhaps our problem is high property prices making restaurant pitches unaffordable to everybody but the mega-chains like Wagamama, All Bar One, Pizza Express, Pret a Manger and Subway. This doesn’t excuse the downright lousy quality of some of our independent restaurants, though – we’re particularly weak on good Asian places. We don’t have any good, well-priced food of the sort that Portland seems to offer several times on every city block. Don’t the English care about what they’re eating? If you’re lucky enough to be in Portland, grab the opportunity to visit Typhoon and congratulate yourself on being in a city where identikit cardboard meals aren’t standard.