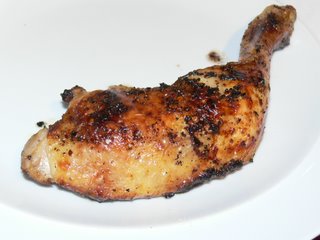 I promised you a post about brining. Brining sounds a bit counter-intuitive at first; how on earth is giving a piece of meat a bath in salty water going to make it taste better?

Back in the dark ages when I was at school, cooking lessons were called domestic science. I am unconvinced that there’s a lot in common between my constructing a pie and the Large Hadron Collider at CERN, but understanding how brining works does actually require you to think back to your biology lessons. This is because what’s going on in your chicken once you’ve popped it in its salty bath involves osmosis, whereby the cell walls in the muscle let through the concentrated brine to try to balance the concentration inside and outside the cells. This results in a plumping of the muscle – the cells draw up the brine all the way into the core of the piece of meat and become very juicy, leaving you with a lovely moist piece of cooked meat. There’s also some denaturing of protein thanks to the salt; this will make your meat much more tender. All this science works at its fastest and best when your brine is as close to freezing as possible – once you’ve made yours, refrigerate it (perhaps with a couple of ice cubes bobbing around in there) until it’s very cold before using.

The brine can also push certain flavours deep inside the meat (far deeper than ordinary marinading can achieve). When choosing what flavours to add to your brine, be careful – you need to use only those aromatics which are soluble in water or vinegar, not those (like the essential oils in a lot of herbs and spices) which are only fat-soluble – these flavours won’t make it past the cell membranes. Any of those chilli sauces which have a vinegar base (Tabasco, Frank’s and so on) work brilliantly in a brine; so does lemon juice, Worcestershire sauce, soy sauce, mustard, flavoured vinegars and any alcohol. Be careful when adding wine or cider to a brine though; because the brine works on the deep tissue of the meat, not just the surface, it can be hard to cook the brined meat little enough to keep it tender while also cooking it enough to burn off any alcohol lurking deep in the middle.

I like sugar or honey in a brine, especially with chicken, because as well as adding flavour to the meat, it makes the surface skin much nicer – brown, crisp and quick to caramelise. You can add another variable by buying some vacuum containers like the ones I reviewed here, which will make brining about four times faster. Without a handy vacuum tub, brining times for chicken are:

I’ve made a jerk rub to slather all over chicken once it comes out of the brine. This Jamaican seasoning is unusual in its heavy use of allspice, usually a dessert spice, and it works really well here. To make unbelievably succulent, spicy chicken for two, you’ll need:

Chicken and brine
1 chicken, jointed into six pieces (ask the butcher to do this for you or go at it yourself with a very sharp cleaver)
70 g salt
1 litre water
1 ½ tablespoons Tabasco sauce
2 tablespoons honey

Mix the water, salt, Tabasco and honey and heat gently in a saucepan, stirring, until all the salt has dissolved. Chill in a large bowl in the fridge until very cold. Add the chicken pieces to the brine and leave for an hour and a half.

Remove the chicken from the brine and pat dry with paper towels. Drizzle with a little olive oil and rub well with the jerk seasoning. Grill the chicken on the barbecue or under the grill in your oven for about 7 minutes per side (be careful here – for some reason, brined chicken takes less time to cook than virgin chicken).

I’ll put up a recipe later this week for a plantain accompaniment for this chicken.