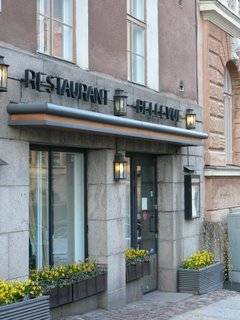 The Katajanokka area of Helsinki – this translates as Juniper Point in English, which I think is rather splendidly romantic – is where you’ll find the Russian Orthodox cathedral, some gorgeous Art Nouveau buildings, and the city’s oldest Russian restaurant. Bellevue (Rahapajankatu 3, 00160 Helsinki) opened in 1917, a year which found a lot of Russians looking for an out-of-town venue for lugubrious vodka and bear-stew parties, and has been serving traditional dishes ever since. The menu says that this place would never have survived so long without a thorough understanding of the ‘joys and melancholies of the Russian soul’. I can see what they mean. The food was so tasty that it made me want to weep uncontrollably.

Oddly, you’re greeted at the door by a signed photograph of Barbara Bush (melancholy). Inside is a cosy clutch of dining rooms, decorated in sombre colours with paintings of troikas on the walls, the sound of Russian bass voices (more melancholy) hanging woefully in the air as you drink your grain alcohol (joy). The menu – there is an English-language one for those, like me, whose Russian is even worse than their Finnish – is packed with old Russian favourites like a borscht thick with grated beetroot, wild boar tartar and potroast bear. 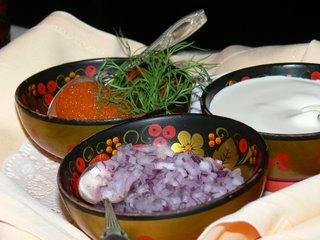 I’ve been wanting to try vendace roe since we’ve been in Helsinki. The northern European vendace is not the same as the fish of the same name you find in parts of England; it’s a whitefish which was called the ‘favourite fish of the Tsars’, and its roe is particularly prized. My serving of apricot-coloured roe turned up in a little lacquered wooden bowl painted with rowan berries, alongside bowls of smetana (a fermented cream a bit like rich soured cream) and sweet red onion. The blini that arrived to go with the roe was a monster – about five inches across and half an inch deep, made from a floatingly light buckwheat batter and sizzling in literally heart-stopping amounts of aromatic butter. Joyful tastebuds, melancholy arteries. Vendace roe has a delicate flavour, less salty than most other fish roes you’ll find on tables Russian and otherwise, and was richly gorgeous glopped all over the blini with generous amounts of smetana and onion. 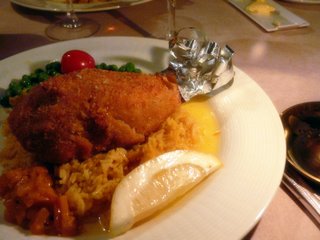 You’ll find a recipe for Chicken Kiev on this site, and it’s interesting to compare it with Bellevue’s more authentically Russian (and rather more attractive) version – they provide the recipe here. This Kiev is plump and juicy. The waiter stabs it with a knife at the table for you, and a simply amazing amount of lemony butter leaks out into the mildly curried rice on the plate. A peach chutney marries up very nicely with the rich, butter-swimming chicken breast. I wasn’t able to finish mine; especially after all the butter in the blini, I found I was in danger of keeling over (melancholy) from the sheer richness of it all. Fortunately, Dr W is like a Jacob’s Cream Cracker in his ability to soak up vast amounts of butter (joy, I suppose), and happily ate anything I’d left.

All this left me unable to face anything very challenging for dessert, so I asked for the Russian tea tray. A glass of pale, black tea in a silver holder arrived, alongside some strawberries and biscuits, and a silver pot of raspberry jam. ‘Put it in your tea’, said the lady serving me. I assumed this was another Russian melancholy joy, and did what she said.

Tea with jam is, it turns out, a bloody marvellous idea, and I have no idea why it’s not precipitated further west. (See? Joy at the discovery that there’s something you can do to make tea even nicer, and melancholy when you realise that there’s no way anybody back home is going to believe you when you tell them how good it is.) Raspberry jam is really, really good in tea, being rather tart as well as sweet, and it turned the little glass of steaming tea into something like distilled joy when compared with those melancholy dried fruit teas you can buy at vast expense in branches of Whittards back home.

Filled with joy and melancholy, we walked back to our hotel alongside the waterfront, torn between kicking our heels and throwing ourselves into the Baltic.

One Reply to “Bellevue, Helsinki”