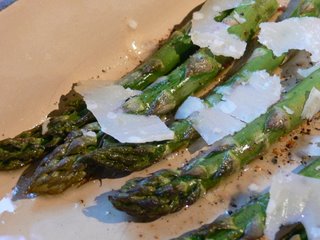 If you thought the hollandaise sauce recipe from the other day sounded like too much hard work, this asparagus recipe will suit you down to the ground. It’s very quick and easy, and this cooking method makes the most of the tender sweetness of the stems. It also looks posh, so you can serve it up as a starter (or as an accompaniment) to guests and feel smug when they congratulate you on something which, in reality, only took you five minutes to put together.

For a starter, look at serving between six and eight stalks of asparagus per person. You can get away with less than this if you’re making it to accompany something else as a main course, but it’s worth making plenty because roast asparagus is downright delicious.

To serve two as a starter you’ll need:

Snap the bottoms off the stems of asparagus. They’ll come apart naturally, with a lovely snapping sound, at the point where the woody part (which you don’t want to eat) begins. Arrange them in a single layer in a baking dish.

Sprinkle the flaked chilli and lemon zest over the asparagus, and drizzle with the olive oil. Roast the asparagus in the oven for 10-15 minutes until bright green.

While the asparagus is roasting, use a potato peeler to shave the parmesan into little pieces. As soon as the asparagus comes out of the oven, scatter over the parmesan, which should soften a little as it meets the hot asparagus. Serve the roast asparagus with crusty bread if you’re eating it as a starter.