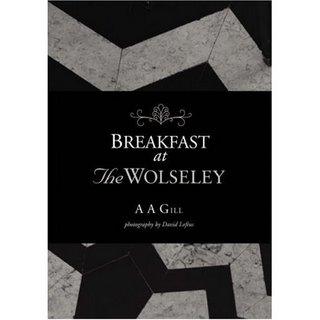 A friendly publisher mailed me just before I left for New York, asking if I’d review a couple of books here for them. Always up for a freebie (I am nothing if not venal, especially where books are involved), I said yes – and was very, very pleased when Breakfast at the Wolseley

turned out to say A.A.Gill

on the cover. If you’re not a consumer of English newspapers, you may not have come across him; he’s an author and journalist with a liking for smoking jackets and waspish prose. These days, Gill is the restaurant critic for the Sunday Times, and his is usually the first page I turn to when reading the papers in bed. His writing is unapologetically baroque and often vicious – his description of the Welsh as “loquacious, dissemblers, immoral liars, stunted, bigoted, dark, ugly, pugnacious little trolls” in the Times about ten years ago (he also said that “You can easily travel from Cardiff to Anglesey without ever stimulating a taste bud,”) nearly caused a Celtic uprising and sparked so many complaints from outraged Welshmen (no idea why – I’m married to one of the pugnacious little trolls, and it seemed fair enough to me) that the Press Complaints Commission and Commission for Racial Equality had to weigh in. We Brits love a Commission.

The Wolseley is a café-restaurant next to the Ritz in London, set in a building which was originally a gorgeously opulent showroom for Wolseley automobiles in the 1920s. That aesthetic runs through the restaurant itself as well as the book: the hard cover reproduces the design of the marble floors (themselves copied from Brunelleschi’s floors in Santo Spirito in Florence, according to Gill), while a tiny black dust-slip does double duty by carrying the title and author while acting as a slim belt to dress up the cover. I do not usually witter on like this about the outside of a book, but this one is very pretty, and the copious and beautiful photography inside keeps the loveliness factor high. They top it all off with a black satin ribbon bookmark. If this book was a person, it’d be wearing a velvet opera cape.

The book opens with an essay on the Wolseley’s history, then one on breakfast; Gill then walks us through a night’s preparation in the restaurant kitchens for the breakfast rush, but somehow takes us there via the Turkish siege of Vienna (croissants, pastries, espresso), Capuchin monks in Venice (cappuccino) and the beekeepers of South London (who supply the Wolseley with honey and beeswax for their cannelés de Bordeaux). My only complaint here is that because he’s writing about something he really enjoys, Gill is having trouble being as poisonous as usual, and I love him for his poison. Every now and then, though, the sliver-tipped dagger slips through the silky prose, so the restaurant’s customer database becomes “a benign Stazi report”; we are ticked off for moving from the “sugar-crusted, multicoloured, zoomorphically shaped processed carbs of childhood for the sombre, brown, bran-rich, blandly goodly flakes of colonic probity and adulthood”.

More short essays open each of the food chapters – Vienoisserie; Eggs; English Breakfast; Fruit and Cereals; and Tea, Coffee and Hot Chocolate. Rather wonderfully, you are offered bulleted instructions on how, for example, to prepare the perfectly poached or scrambled egg; a perfect cup of coffee (a discussion of the coarseness of your grind and whether you should select an Arabica or a Robusta); tea types and terminology. The night churns on – Polish plongeurs (“slim-featured, pale-eyed, all of them with the same contrary mixture of relief and resentment: a battened-in, taciturn, steely ambition”) flop about with rubber gloves and misery. I said above that Gill’s prose is baroque and it can be an acquired taste, but it’s a taste well worth acquiring if only so that you can read what he has to say about yoghurt.

The essays are punctuated with a good solid armful of breakfast recipes (not by Gill). These are the dishes we all secretly love and avoid eating regularly for the sake of our arteries and pancreas – eggs Benedict, pain au chocolat, omelette Arnold Bennett, lamb’s kidneys with Madeira, crèpes, haggis and duck egg. My heart throbs with the writing, my salivary glands do that squirty thing with the recipes. No recipe for the darned cannelés de Bordeaux, which saddens me, because I love the things.

I am torn between keeping this book in the kitchen so I can practise poaching eggs (a trick I have never quite got the hang of) or on the bedside table so I can read about the English breakfast’s “cacophony of meat” before bedtime. I suspect I’m just going to be running up and down the stairs a lot. Just as well, given all the black pudding.

4 Replies to “A.A. Gill, Breakfast at the Wolseley”