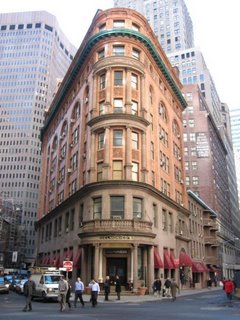 America is a country where every third restaurant seems to be a steakhouse. I didn’t want to overdo the steak, having watched Beverly Hills Cop as a child and taken that thing about your colon very seriously, so we decided on one steakish meal over the week we were in New York. This presented a problem – with so many steak joints on offer, which should I choose? There’s Kobe Club, which reviews well but is amazingly expensive (their menu suggests that you order at least two of their 4 oz portions of Wagyu – but the cheapest 4 oz portion is $50, and with side dishes, a shrimp to balance on top of your steak, the very pricey starters, and supplements for any sauces involving ingredients like foie gras, marrow or truffles, it adds up very quickly). I want at least some money left in my wallet for clothes shopping while I’m in New York, so Kobe Club is off the list. Craftsteak also has an excellent reputation, but Tom Colicchio spreads himself awfully thin – he’s currently involved in 13 restaurants across the United States, so it doesn’t feel very special. Good steak is something so many restaurants here do – so I want a restaurant with something extra-interesting to it. Enter Delmonico’s. (Turn your speakers off before clicking this link – there is intensely aggravating music.)

What’s interesting about Delmonico’s? Simple: it’s the oldest continuously run restaurant in the US, and may be the first fine dining establishment in the whole country, having been established in 1827. Those pillars outside? Imported from Pompeii in the 19th century. This is where Lobster Newburg, Chicken a la King and Baked Alaska were invented; the restaurant also gave its name to the Delmonico steak, a cut served in restaurants all over the country. (They also claim to have invented Eggs Benedict, but this seems to be controversial.) Mark Twain has eaten here – so have Theodore Roosevelt, Dickens, Oscar Wilde, Tesla, Napoleon III and a positive galaxy of America’s great and good. We booked for a Wednesday night, put on those clothes we’d been able to afford because we didn’t go to Kobe Club, and got stuck in.

The dining room is very masculine; all dark leather and wood panelling, like a meaty gentlemen’s club. Service was smiling and fantastically personal – my cocktails, including the most savoury and well-balanced Dirty Martini I’ve ever tasted, were constructed at the tableside in a silver shaker. The menu still includes some of the classic dishes from the restaurant’s past, although I was disappointed that there were no Delmonico Potatoes – a gratin made from parboiled potatoes grated into long shreds with parmesan and nutmeg. That famous steak was there, though, along with the Lobster Newburg and Baked Alaska.

Dr W plumped for a Caesar salad to start with so he could fit in as much steak as possible later on. It was a good example, dressing clearly made in-house and strongly flavoured, with white anchovies interlaced on top. I went for the foie gras, dusted with crushed hazelnuts and grilled, then served hot with three fruity sauces. The crushed nut/foie combination is one that pops up more and more often these days, and it’s a good one, the toasty richness of the nuts complimenting the buttery foie beautifully. This little lobe was nicely and neatly prepared, too; no stringy or bitter bits.

The Delmonico steak (a wet-aged, boneless ribeye) was thick, and served perfectly medium rare; it was gently crusted on the outside, the fat crisping and delicious, and marbling the whole piece. It was also enormous, weighing in at 20 oz, and I wasn’t able to finish it, which made me extremely jealous of Dr W, whose salad decision was a good one which enabled him to absorb his entire steak into his person. Spinach and parmesan and something called “The Perfect Hash Browns” made for good sides, although I’d quibble with the “perfect” thing; they weren’t particularly interesting or memorable.

It is a happy freak of biology that I appear to have been born with a separate stomach especially for dessert. I couldn’t have packed another atom of beef in there, but Baked Alaska (two spoons, because Dr W was so full that tears were appearing in the corners of his eyes) sounded just the ticket. And where those hash browns hadn’t lived up to their description, the Baked Alaska was pretty much divine. A piped hedgehog made from tens of caramelised meringue peaks surrounded a soft, but not melting centre of gorgeous, gorgeous banana-candy ice cream, sat on top of a piece of sponge studded with juicy pieces of apricots. Regular readers will know that I’m not much of a pudding person, but I would be perfectly happy to eat Delmonico’s Baked Alaska and nothing else for…ooh…at least one meal every day.