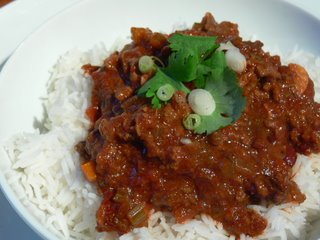 It is with a degree of trepidation bordering on downright terror that I post a chilli con carne recipe. Chilli is one of those dishes which people have very set ideas about – your family chilli will probably differ from mine, the canonical chilli recipe from your town will differ in some subtle and important way from the canonical chilli recipe from the town next door, and I fully expect howls of outrage in the comments section because there’s some detail in my chilli which you think is downright barbaric in comparison to yours. Howling makes me nervous. Let me know what makes your own chilli recipe special – and if you can do it without the howls I will be super-grateful.

This is one of those recipes which rewards you for making extra. Like all casseroles, it’s best eaten when it’s had a night in the fridge for the flavours to meld, and I like to freeze several portions for those lazy evenings when you just can’t pull together the energy to cook from scratch. 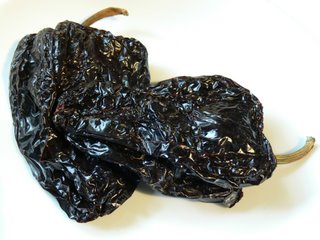 I’ve used Ancho peppers here – compare them to the fresh Poblanos (their non-dried cousins) from the crema earlier this week. If you can get the fresh peppers, it’s really worth making the crema to accompany this dish. The Anchos and another two varieties of chilli work with the bell peppers to achieve a gorgeously rounded, fruity base to the dish, packed with chilli heat.

To make between eight and ten portions, you’ll need: 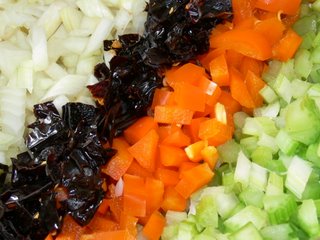 Dice the onions, celery stalks and bell peppers into even pieces, and use scissors to chop the Anchos (seeds and all) into bits about the same size. Chop the garlic into small pieces. Take a large, heavy-based casserole dish, and blanch the diced vegetables with the cumin, fennel, cinnamon stick, cayenne and bay leaves in a couple of tablespoons of olive oil, stirring all the time, until they are turning soft, but not taking on any colour.

Add the steak mince to the casserole dish and cook over a medium heat, stirring well, until the meat is browned. Pour over the passata and the wine, stir the Chipotle peppers and their sauce, the tomato puree and a large teaspoon of salt into the mixture and bring up to a simmer. Turn the heat down low and put on the lid, and leave to simmer for 1½ hours, stirring regularly.

At the end of the cooking time, stir the drained beans in and continue to cook for ten minutes. Taste for seasoning – you will probably have to add a little more salt. Add the juice of one of the limes, taste again and judge whether you will need the other one. (Limes vary in sharpness and juiciness, so you may be able to use just one.) Decorate the finished chilli with chopped coriander – I like to have a bowl on the table so diners can add as much as they like.

If you haven’t made the crema, a bowl of sour cream on the table will be tasty and will help take the heat of the chillies down a little. There are plenty of easy Mexican recipes on Gastronomy Domine you can pep this up and add interest with – it’s great for an informal party – try one of the salsas, some guacamole or a gorgeous corn and squash puree. You can serve your chilli on rice, as I have here – it’s also great in tortillas, on a baked potato or even with chips for dipping.