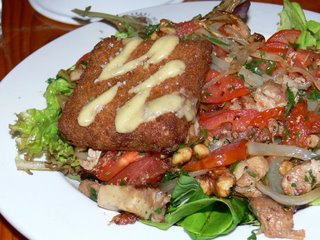 The French (and, doubtless, the French Canadians) have a term for the thing that happens to your body after a meal like this – it’s a crise de foie, or a liver crisis. My own liver is palpitating and throbbing, has likely become hardened and greenish in parts and feels as if it’s doing its job about as competently as Gordon Brown, but this is a small price to pay for a sublime meal. Even if it’s a sublime meal that makes you have to go and lie very still in a darkened room afterwards.

Au Pied de Cochon (536 Duluth Est, Montreal, 514-281-1114) is run by foie gras and fat genius Martin Picard. It’s a Montreal institution, always heaving with diners (who are, strangely, quite thin for the most part) – you’ll have to book, and book well in advance. This is a menu where you’ll find foie gras in almost every dish; where offal and fat are treated with something between respect and worship.

We opened with the home-brewed beer and starters which we thought we had cunningly selected to avoid too much richness before the main course. After all – salads and soups are the thinking person’s way to ensure there’s room left for pudding, aren’t they?

Dr W’s French Onion Soup was based around a darkly glossy, rich and meaty stock, and came in a bowl large enough to drown a small family in, topped with a battleship-sinking amount of cheese. It was also extremely good, so he drank it all with little thought for saving room for what came next. My own Crispy Pied de Cochon Salad (see the picture at the top of the page) was only a salad in the very loosest sense – fatsome, hot nuggets of pork nestled with walnuts in a salad full of fried onions, roast tomatoes and steaming meat juices, any green leaves wilting gorgeously against the warm ingredients. On top was balanced a deep-fried, breaded square about half the size of a fat paperback book, sprinkled with some fleur du sel. Poked with a fork, it leaked an intensely porky, gelatinous mash of pork hock, made liquid by the heat of the frying. Something in that pork went straight to the self-control centres of my brain and prevented me from stopping eating before the plate was nearly clean.

Starters over, we looked at each other in panic. There was clearly no way in hell we were going to be able to manage our main courses. 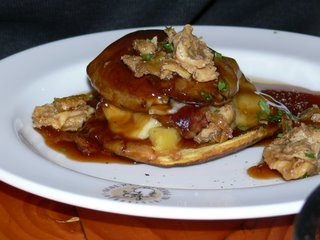 Something untranslatable called a Plogue à Champlain arrived for Dr W. It’s a pancake. And a thick slice of home-cured bacon. And some crispy potatoes. And a layer of melted cheddar cheese. And a lobe of foie gras. And a ladleful of a rich, sweet duck and maple syrup sauce.

I realise that this sounds like a total abomination. God knows how Picard came up with it – and it doesn’t make the slightest sense on paper – cheddar and foie gras? Nonsense. But once this stuff is in your mouth, you’ll see exactly why this man is a fruitcakey, cheese-sodden genius. Utterly amazing, completely delicious and approximately 240% bad for you. Between moans of pain from a rapidly distending stomach and imprecations to various deities, Dr W cleaned his plate. 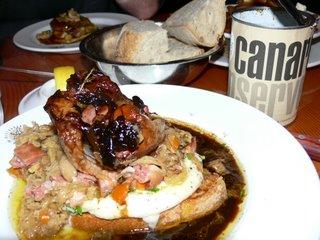 I’d ordered the Duck in a Can. A plate arrived, bearing a large slice of toasted sourdough bread covered with a thick layer of celeriac purée. Next, a waiter with a large, hot can and a tin opener came to the table, unzipped the top of the can and poured the contents over the slice of sourdough with a fabulously meaty schloomping noise. A fat magret de canard, yet more foie gras, some whole garlic cloves and unctuously buttered cabbage, dotted with bits of preserved pork sausage, slipped out in a balsamic glaze – the meat and vegetables aren’t preserved in the can, merely cooked in there in a sort of weird sous vide style. (Something of a shame, in that this means you won’t be able to buy your own can to take home.) Meat touching the bottom of the can had caramelised into a sticky, heavenly layer of goodness – and I have no idea how cabbage can come to taste so good.

This thing was absolutely enormous. Even if I hadn’t consumed nearly my own weight in fatty pork only ten minutes earlier, it’s unlikely I could have made much headway into the dish – as it was, for the first time in my life I found myself eating around a foie gras, because all this richness was becoming simply unbearable. My god, though, the aroma coming off this dish was incredible. So much so, that people at the next table turned, asked what it was and immediately ordered one each.

I tried. Really, I tried, but ultimately the terrible groaning noises emanating from my entire digestive system from the gall bladder down did for me, and I ended up leaving more than half of what I’d been served on my plate. I asked Dr W if he fancied a dessert. He looked at me with dull, bilious eyes and whispered, “No. I think I need to lie down. I’m not sure I’m going to be able to walk back to the hotel.”

We staggered back to the hotel. Slowly. We lay down. We have nearly recovered. We’re going back again on Friday evening.