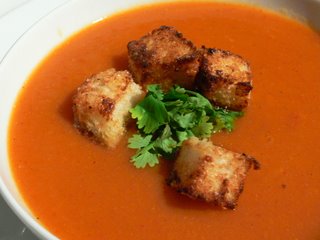 Just in time for you to buy the ingredients before Halloween, here’s a seasonal soup. (When I mentioned to Dr W that I was making a Halloween soup, his response was: “Ooh. Will it have blood and pus?” Sorry, love. It’s only got squash and peppers.)

The pumpkins you buy for carving don’t have the sweet, chestnutty character of many of the smaller squashes, so they’re better kept for carving and putting on the windowledge. A pumpkin-type soup is better made with something like a butternut squash instead, which has a great flavour and texture, and can be a bit easier to handle than some of the rounder squashes. In this recipe, the vegetables that make up the soup are all roasted. The squash will caramelise nuttily, the peppers become sweet and silky…and surely, there can’t be anything nicer than a roast onion? I’ve topped the lot off with some gorgeously savoury, crispy garlic and parmesan croutons. Halloween heaven.

Preheat the oven to 180°C (340°F). Peel the butternut squash and cut it into chunks about an inch square. Arrange them on a baking tray and drizzle generously with olive oil. Peel and quarter the onions, and put them on another baking tray, cut side up. Dot with the butter and drizzle with a little more olive oil, then sprinkle with salt.

Saute the paprika and coriander in a tablespoon of olive oil in a large saucepan for one minute, then add the squash, onions and peeled peppers to the pan. Saute gently, stirring, for five minutes, then pour over the stock, and bring to a simmer for five minutes. Puree the soup in a food processor (you’ll need to do this in batches) and push the resulting puree through a seive, back into the large pan. Add the lime juice, which will push the flavour of the peppers to the fore, taste for seasoning and leave the soup to one side while you make the croutons.

To make the croutons, preheat the oven to 200°C (400°F). Cut the crusts off the half loaf and discard. Chop the white part of the loaf into cubes about 2cm on each side (a large-ish crouton is nice here, the outside turning crisp and the inside retaining a bit of squashiness). Arrange the croutons on a baking sheet. Grate the garlic into the olive oil, mix well and drizzle over the croutons. Toss them well in the oil so every side is covered with the garlicky mixture, then sprinkle over the parmesan and toss again. Bake in the hot oven for ten minutes until golden, but start checking after eight minutes – these are quite easy to burn.

Warm the soup through, sprinkle with croutons and garnish with a bit of fresh coriander.