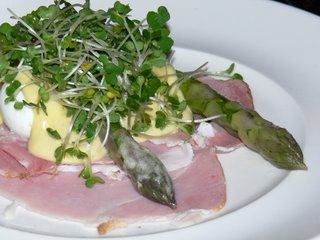 Once a very quiet village about four miles from Windsor, Bray suddenly gained a lot of traffic around meal times when Heston Blumenthal’s Fat Duck (which you have doubtless heard of – it’s regularly voted the very best restaurant in the UK, and fights each year with El Bulli in Spain for the title of best restaurant in the world) opened. Meal-time traffic, composed almost entirely of taxis from nearby train stations packed with salivating diners, has increased even further in the last five years, since Blumenthal bought the pub next door to the Fat Duck.

The Hind’s Head menu is a showcase for what Blumenthal considers the very best of straightforward, traditional British cooking. Blumenthal’s cooking at the Fat Duck (at £130 for the tasting menu without wine, you are going to have to wait until the ads on this site are paying a lot more before you can read about the Fat Duck here, so get clicking) is all crazy-wonderful, experimental, molecular stuff. I wandered over to inspect the menu on the day we visited the Hind’s Head, and there was lots to appeal to the side of me that does the perfume writing as well as my foodie half. Oakmoss used as a flavouring, sprays of aldehydes, violet tarts, pine sherbert fountains – I breathed a heavy sigh and went back to the pub, words like ‘straightforward’, ‘traditional’ and ‘British’ boiling around in my head, convinced that I was bound to spend the evening wishing I was next door.

I think that the last completely uncritical review of a restaurant I wrote was posted here back in 2007, and I found it very difficult to write; roundly complimentary reviews of food make me sound, as I said back then, an unthinking and uncritical diner, and they are likely to be as boring as hell for you, the reader. (Un?)fortunately, the Hind’s Head turns out to be another of these little bits of restaurant heaven. Even the menu prices were a delight, and the incredibly enthusiastic, very young waiter made our evening a real pleasure. I spent the meal looking for something to get ratty about, and I am proud to be able to give you one piece of fierce criticism. I do not like paper napkins.

Still and all – paper napkins in a pub are probably absolutely right, so you can probably scratch that.

This being a pub, you can grab a beer at the bar before you sit down. There’s a short but good list of beers and a lengthy and very keenly priced wine list. We ended up with a bottle of 06 Bordeaux at £24 – it could have done with being cellared for a few years, but was terrific at the price. There are bar nibbles too – Scotch eggs made from quail’s eggs, devils on horseback (prunes wrapped in bacon, secured with a toothpick and grilled – they’re one of my favourite Edwardian savouries, and Blumenthal is very into his historical foods) and something called a Warwickshire Wizzler, which turned out to be a cocktail sausage which tasted as if it was made from the fatty flanks of angels, spiced heavily with sweet paprika. Our table of four spent a happy few minutes gumming our way through a selection of nibbly bits.

The menu presents you with a mixture of seasonal and traditional dishes. The asparagus is at its sweetest at the moment, and it was listed here with some free-range ham, cress, a dense Hollandaise and a rich, yolky pheasant’s egg. (See the photo at the top of the page.) It was a simple and very generous presentation, which is precisely what you want with asparagus in May. 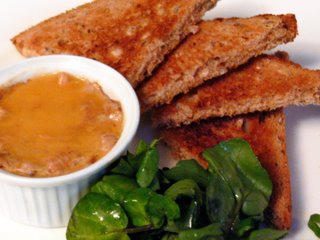 I ordered potted shrimp. Tiny, sweet, fresh, brown shrimp, peeled and poached in clarified butter with the traditional spike of mace and pepper, then set in a ramekin, were served just above room temperature with slices of brown toast. The butter was dense with flavour – had the shells and heads been used to flavour it? I’ve no idea, but I do know that this was far and away the best example of potted shrimp I’ve ever eaten. (The worst? That’ll be the unseasoned, woolly pre-frozen white prawns in fridge-hard butter at Shepherd’s in Pimlico.) I found myself unconsciously running a finger around the bottom of the ramekin when I’d finished. Dish-scraping was about to become a theme for the evening.

An excellent beef carpaccio, scattered judiciously with capers and shallots and dressed with a little parmesan, olive oil and lemon juice was a really lovely example of a dish that’s often overseasoned; and a guineafowl terrine, gloriously spiced and seasoned, jewelled with pistachios, wrapped tightly in pancetta and served with shaved slivers of fresh apple and an apple compote, left a distressed Dr W scraping his empty plate with the back of a knife, trying to dislodge any remaining molecules of flavour. Starters over, all four of us started drumming at the table with our fingers to try to distract from the unseemly drooling.

The problem with a menu this good is that it’s extraordinarily hard to make a decision. I went for the shut-eyes-and-jab-at-menu-with-finger approach, and ended up selecting a very dull-sounding main course – the T-bone steak – which I stuck with simply in order to try the sauce that came with it. This is a kitchen which has studied its classical French sauces, and the seared steak (a favourite cut, T-bone, with the softer tenderloin on the smaller side, and the tougher but more flavoursome strip loin on the larger) came with a little pot of sauce marchand de vin (butter, wine and dark beef stock), studded generously with little diamonds of rich, beefy bone marrow. Tipped over the steak, the marrow melted a little into the meat, the dense sauce so packed with flavour that thinking about it a few days later is giving me flavour hallucinations. I am alarmed to note that I found the whole thing almost viscerally sexy. Food shouldn’t be this good.

The steak was accompanied with Blumenthal’s famous thrice-cooked chips. (Fries for you Americans.) They’re thick-cut, as pub chips should be, and boiled, chilled, and deep-fried twice. We ordered another bowl for the table – shatteringly crisp on the outside, and fluffy within. A good chip shouldn’t be something to get terribly excited about (after all, Heston’s chip method is very similar indeed to the one my Mum used when I was a kid), but the sad truth is that most English chips are, frankly, rubbish; it’s very good to find some which haven’t been frozen and shipped into the restaurant in giant catering bags. 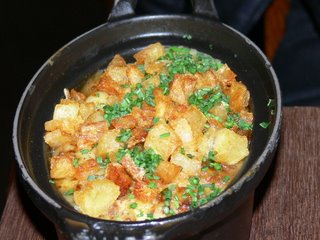 Shepherd’s pie with lamb shoulder, breast and sweetbreads was joyous. It arrived in a cast-iron cocotte, the top cru
sted with crisp potatoes. Inside was a dense, meaty, almost syrupy filling; the lamb breast gave the sauce a rich, jellied thickness, while the sweetbreads gave the whole an intense richness and a malevolent hint of offaly darkness. Happily, the friend who ordered this wasn’t quite able to finish her very rich and generous portion, so her remaining pie filling was enjoyed by the rest of us, slathered all over those chips. This bowl got scraped clean too.

The serving and cooking temperature of foods, as we saw with the potted shrimp, is something that the kitchen here considers carefully, and salmon with shrimp and peas was cooked and served warm, not hot. The waiter made sure that the person eating it (James, who nearly choked to death on chillies in Montreal last year) was aware that it wouldn’t come piping hot, and explained through one of Berkshire’s biggest smiles that this is to ensure that the flavour is at its absolute best. I really like the service here. Befittingly for a pub, it’s not very formal, but the staff are so enthused by what they’re serving and by what’s going on in the kitchen that their excitement translates to the diners. This was another seasonal triumph; more of those brown shrimp, sweet peas, flakingly moist salmon in a savoury marinade – simply gorgeous.

Chicken and leek pie, sitting in a sea of intensely savoury Mornay sauce thick with whole-grain mustard, was one of those dishes you could happily keep on snuffling down plate after plate of, until hustled out of the restaurant for revolting the other diners. Happily for those other diners, desert beckoned. 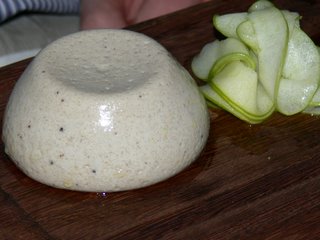 Blumenthal’s a history buff, and the Quaking Pudding arrived with a little notecard (which I believe Ros has now pasted into her scrapbook) full of historical detail about wrapping things in guts and so forth. No guts were apparant here; Quaking Pudding was a delightfully wobblesome jellied milk pudding, a little like a panna cotta (and made in the same way, with milk and gelatine), flavoured with sweet spices like nutmeg, cloves and cinnamon. Unbelievably good (and far better than you could possibly imagine from looking at this photograph, which has an anticipatory thumb in the background) – I’ve been piling through my collection of old recipe books for a comparable recipe. 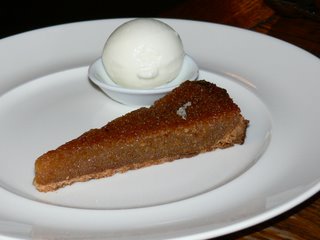 I’d seen Heston prepare his treacle tart with milk ice cream on television once (an exercise which ended with him milking a cow into a bowl full of liquid nitrogen). Utterly, unctuously, good stuff, crisp and squidgy all at once, with an intense, caramelised sweetness offset by a tiny sprinkle of fleur du sel. It was perfectly accompanied by the unassuming milk ice. And trifle – well, I wasn’t allowed to try the trifle, which Dr W appeared to be trying to inhale.

All this, alongside a bottle of wine, several beers, a couple of cocktails, three dishes of nibbly bits, extra chips and a bowl of broccoli with anchovy and slivered almonds, still only rocked up at £60 a head. This is unbelievably good value for such exceptional dining, and it’s a total delight to find that there’s at least one restaurant in the country that’s demonstrating that British food isn’t all lung and slurry. All hail Heston – he’s a one-man army changing the face of the British restaurant, and I hope you’ll visit Bray soon to confirm it for yourselves.