We’ve been promised something called a ‘barbecue summer’ by the Met Office this year, so I thought I’d go with the flow and bombard you with some barbecue recipes – I’m a big fan of charcoal. There’s a recipe for a whole barbecued Thai chicken coming up tomorrow (here it is), but before you cook it, you’ll need to learn how to spatchcock the bird (removing its breastbone and backbone) so that it’ll lie flat on the grill to cook evenly. It’s much easier than you’d think, and all you’ll need is a pair of stout kitchen scissors (or, better, poultry shears) and a sharp knife – here’s how you do it. 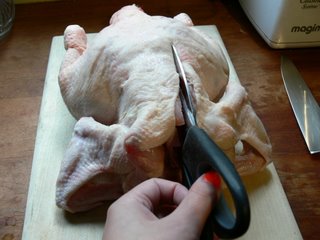 Start by putting the bird back-side up, feeling for the spine of the chicken and cutting with the shears or scissors immediately to the right of it, all the way along the bird. Snip through the ribs as you go – they’re not very tough. 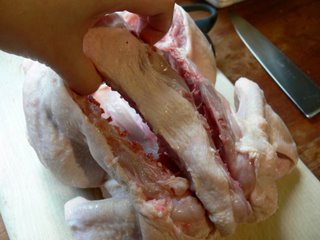 Repeat to the left of the spine and lift out the whole backbone. Don’t chuck it out – pop it in a saucepan with the other bits you’re going to be removing from the bird, and make stock. 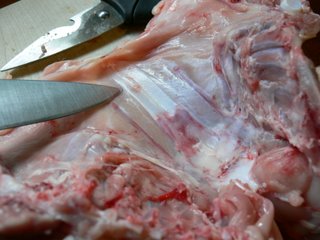 Pull the legs apart and look into the cavity of the chicken. You’ll see the arrow-shaped breast bone (the bit my knife is pointing at in this picture). Slip your knife all the way around it, loosening it from the surrounding flesh. 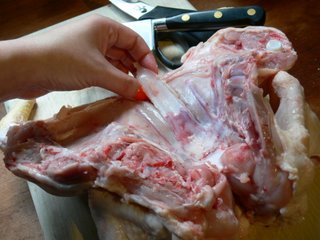 Pull the breastbone out of the bird (the whole thing – it widens and goes all the way to the end of the chicken). You might need your scissors again to release it from the breastmeat. 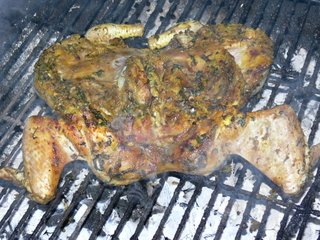 And you’re done. Your finished chicken will be lovely and rubbery and foldy, ideal for marinating and grilling. Pop back tomorrow for marinade and cooking instructions.

3 Replies to “How to spatchcock a chicken”